Consensus is a decision-making model used by WikiFur to encourage discussion and participation in editing. In simplest terms, it means "agreement," though in some cases, consensus may be a majority view and not reflect every viewpoint. It is important, however, that each viewpoint be considered, because WikiFur belongs to the whole community, not just to an elect few.

Consensus flows out of the normal way that people interact with one another in collaborating and resolving disputes. At its most basic, it refers to the normal editing process. In cases of disputes, the community works to resolve the issue by discussion and compromise. It is important to remember that consensus is a community process. Do not assume that the curators will "make a ruling" on a controversial issue. 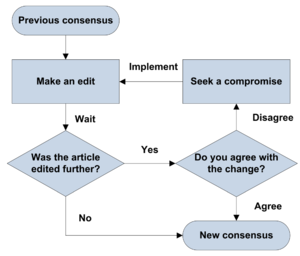 When an edit is made, other editors have these options: accept the edit, change the edit, or revert the edit. These options may be discussed if necessary.

Consensus normally arises through the normal editing cycle. In this process, User A submits new material to WikiFur in good faith. User B looks at the article and thinks of ways to improve it, which is not to say that what User A submitted is bad, but that (like nearly everything in life) there are ways to make it better. An article may go through several revisions this way, with different editors expanding it, fixing technical issues (grammar, spelling, punctuation, etc.), adding special codes to wikify it, and so on. Because each edit represents the good-faith effort of the editor to improve the article, this process normally takes place quietly and without controversy.

Each editor is encouraged to be bold in making changes; you do not need to ask formal permission to edit general articles. Other viewers may either accept the change, try to improve the change, or revert the change. Discussion on the talk page is encouraged, as are explanatory edit summaries. These help to explain your reasons for making a change, and may help demonstrate good faith.

If other editors and viewers accept your changes, then that silent acceptance is considered "implicit consensus" that your edits are acceptable at this time. It is not necessary to document this formally; it is a fundamental part of how our editing process works. Bear in mind that other users may later make changes at any time.

Just because an article or other topic of discussion has reached consensus, please do not assume that it is now "set in stone" with the force of policy. This is a vibrant and growing community, and ideas may change over time. Do not reject edits outright on the grounds that they "violate consensus." The fact that someone is making an edit demonstrates that consensus can, and will, change over time. Assume good faith, and consider the new edits in light of all information currently available. Discuss on the talk page as necessary. Evaluate all edits and proposals on their own merits, not on the basis of an outcome that was decided years ago. The world changes all around us, and we as a community must change with it. This continual evolution is indeed both inevitable and desirable.

Policies and guidelines have been established in the WikiFur community, not by arbitrary decree, but to document the community's own consensus about how things are done. To inspire trust and confidence, policies and guidelines should remain consistent and stable. Changes to them should be proposed and discussed with great diligence, and generally these proposals will take longer to achieve consensus. Don't rush things. Because policies and guidelines affect the entire community, the community at large should have the opportunity to comment and participate as they evolve. In some cases, particularly in the case of guideline documents which reflect "best practices" but do not carry the weight of policy, there may be little or no discussion. Such guidelines are generally written by editors familiar with the Wiki process, both at WikiFur and at other sites such as Wikipedia, and silent acceptance of these documents may be construed as consensus after sufficient time has passed for them to be exposed to the community.

In rare instances, it may be necessary for the site operators to impose rules or take actions that are not derived from consensus. Examples include issues concerning copyright, server load, and legal issues.

Inevitably in any community, disputes arise that can not be handled alone. Sometimes edit wars take place, and it appears unlikely that the editors involved will be able to resolve the issue amongst themselves. It is appropriate in such cases for each party to document their positions on the article's talk page, using neutral language and citing sources to verify the information. Other members of the community should also express their views, again maintaining neutrality and offering sources when possible.

The role of curators in consensus[edit]

Do not assume that the curators will take sides. They are members of this community, just like you, and they are bound by the same policies and guidelines. Curators may take action based on their interpretations of policy, guidelines, and consensus, but are not a "ruling class." Please do not expect them to do something just because you ask them to, particularly when the action may be controversial or may not reflect consensus.

While it is appropriate to call attention to an issue, it may be considered inappropriate to frequently and repeatedly do so, or to post about the issue in multiple forums and talk pages at once. Those who are interested in the issue will likely find it on their own, and it is generally not advisable to act as the town crier, shouting in the public square. Any announcements that you make must also be written from a neutral point of view, with an intent to call attention to the discussion, not to sway it. It is inappropriate to use multiple accounts or IP addresses to promote a particular point of view (a process called sockpuppetry), or to recruit many editors in collusion to advocate a position (a process called meatpuppetry).

Finally, editors sometimes use a form of filibustering whereby through repeated edits, reversions, and repeating the same arguments, they hope to outlast the opposition and win the debate. This does not reflect true consensus and is not an acceptable way to reach an outcome.