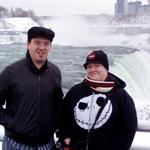 Wicked Sairah is a female sculptor and traditional media artist. She lives in Seattle, Washington with her husband Blueroo. Together, they have a house full of animals named after rock bands and cartoon characters. She makes her living as a freelance artist, selling sculptures and commissioned artwork over the Internet, and is a rabid collector of Disney animation cels and memorabilia.

Sairah's real name is Sarah Krueger. She originally adopted Sairah as her name when she began creating furry themed art. Before that, she sold artwork under her own name at local festivals and art shows. The name Sairah is pronounced exactly the same as Sarah. Sairah also has other characters that show up in her art, including Proudfoot the Native American Fennec Fox, Captain Roscoe T. De Vil the Tasmanian Devil Pirate and Murdock the Raccoon Dog Pirate.