Who Framed Roger Rabbit is a mixture drama film produced by Amblin Entertainment and New Line Cinema, released in 1988. It was based on the novel Who Censored Roger Rabbit? by Gary Wolf.

The film is set in a fictionalized version of 1947 Los Angeles, where animated characters (always referred to as Toons are real beings who live and work alongside humans in the real world, most of them as actors in animated cartoons. 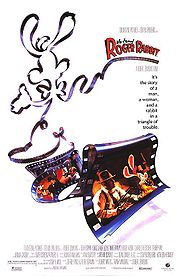 One of the several posters for the film

Did you know?: Who Framed Roger Rabbit is the first and only time Mickey Mouse and Bugs Bunny have appeared on screen together.