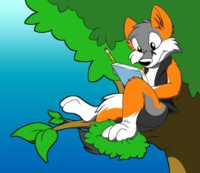 Whitefire has been a member of the Furry community since the early 90s but has only been an active member since 2005. He currently[when?] lives near Harrisburg, Pa and considers himself to be one of the few PG artists remaining in the fandom and continues to raise awareness and acceptance for more innocence.

Whitefire has always had a love for animals and cartooning ever since his little eyes viewed their first cartoon. From that point on he attempted to emulate every aspect of what he saw of these larger than life creatures. From outside play, to writing stories, to imitating sounds and voices, to even recreating images. However out of all of these characters he has always has the deepest connection with foxes. (The most misunderstood villains in cartoon lore at the time.)

As he grew up, where most kids grew into other interests, Whitefire's passions only continued. This cause him many social issues as this caused him to be deemed a social outcast and a lone wolf.

Along side of his furry passion he had other interests as well. His Christian upbringing being one of them. During a night of praying, His mind kept sparking an almost angelic golden and white fox with a pure fire surrounding it. The more he prayed, the more the fox persisted until he had no choice but to ask who the creature was. It was revealed to be named "Whitefire". When asked why was that it's name, it was explained it meant "Pure spirit".

The youngster's excitement however would be quickly dashed as he was accused by the church of having being visited by an evil spirit and he was rebuke Whitefire. Not to anger God, the youngster attempted to do so with every fiber of his being. But the more he tried the more the fox persisted. Finally, having enough, he turned to a good christian friend who simply asked him, "Why would you rebuke yourself?"

Curiously, this friend reveled that he too saw the fox and that it wasn't an evil spirit. He also explained, that instead of running from it, he should try to get to know the creature. Since then, The young man has built a relationship with himself which help in his healing from a traumatic childhood.

Whitefire had heard of the term "furry" before but knew nothing about it outside of basic mainstream terms. This was during the time when the internet was just first bursting onto the scene; so information was very sparse. Alienated, Whitefire continued to draw furry content and develop his fursona until in 2005 he met another fur who began to point him in the direction of the fandom thru popufurs such as 2 Gryphon and Uncle Kage. Finally, in 2007, Whitefire was able to attend his first convention, AC07.

Whitefire has written numerous fanfic novels although none have ever been published.

The Seventh Seal was a futuristic Christian sci-fi drama taking place in the near future. It was a short story about 3 girls who had to survive thru the rapture and the rise and fall of Satan's kingdom.

Book 1 - The story began with her meeting a hapless inventor by the name of Diode. Instead of eating him, the two became good friends and with his inventions and her uncanny ability to repair anything, the two were able to create a very success business. As the story went on, we were introduced to more characters such as Jim and Sam, a pair of down on their luck drifters, and of course the main villain Baa. Book 1 ends with Baa and Gadgett becoming fused to the amulet.

Book 2 - Book 2 mostly starts out one year after the first book ends. Gadgett is reunited with Jim and Diode, and go for a journey cross country where they get involved in the Nascar circuit and end up meeting James, a washed up driver who is trying to make his grand comeback. Though James was pretty much the villain through this book, he ends up joining forces and helping Gadgett, Jim, and Diode in defeating Baa.

Book 3 - Book3 has got to be one of the most demonic out of the books since Gadgett ends up going on a murderous rampage. In this one, they are not battling Baa but end up fighting a multiple number of demons named, Legion. In this book, they have no choice but to align themselves with Baa. However this book is carried over into 4 When Baa betrays them and takes Gadgett away to the center of time.

Book 4 - Book4 picks up right where book 3 left off, the gang goes after Gadgett and find themselves lost in a world in the midst of a civil war, in which Jim is reunited with his daughter who was killed at the end of the first book. This was supposed to be the end of the series as to prevent Baa from possessing and escape thru her unborn child, Gadgett killed herself and Baa.

Book 5 - Book 5 took us into Gadgett’s afterlife in which she is split in half. Her good side to ascend to heaven while her evil side would perish in the fire pits of oblivion. Rather than face such a fate Gadgett’s evil side escapes and traveled back in time to destroy everything Gadgett was. Therefore, Gadgett has to go back and stop her, and learns more about her past and what really caused the death of her parents. This book closes with time itself collapsing in on the two of them and them escaping thru the only route available to them, thru Gadgett’s birth

Book 6 - Now everything is all messed up as Gadgett now has a twin sister, “Ratchett”, and instead of having the amulet placed around her neck when she was a baby it was put on Ratchett. So now Baa is alive again and they both want Gadgett dead. The strange thing is even after Gadgett is able to kill Ratchett, she keeps coming back. Gadgett finds out at the end that Ratchett has actually been trapped between realities and has been destroying all the realities in which Gadgett is victorious. Pulling her from normal reality, Ratchett faces Gadgett in their final battle, ending the series for good.

Stargazer: The story of Nwahs McKelvey and Dawn Grave and their journey across the country to find out what has happened when two realities have merged and what fate their lives will hold.

Backlash: Taking place six months after the first book, Backlash is the continuation of Dawn's adventures as the two realities never completed merging and is now slowly ripping the planet as well as her mind apart.

Redemption: The conclusion of the Series takes us into the future. Dawn and Sasha ban together one more time to figure out if there is a way to save the planet. But with only one week remaining (168 hours) before the end, Dawn must not only keep Nwah's daughter away from her father, but also understand why her dead sister Joyce is the key to saving the world and what role Nwahs has to play.

After taking a few years long hiatus,(2012-2015) Whitefire has been working diligently in reprising his role in making the fandom a more welcoming place for everyone.

Not the young fox he once was, back in the fall of 2015, Whitefire has given his fursona a complete overhaul and has given himself a more simplistic design. No long a golden fox, Whitefire has been changed to a simple black jacket, grey fox (an depicture of his graceful aging). He has also lost his angelic fiery glow. He has been in the process of restoring all of his old characters.

Whirefire has created a variable world of characters that he has used in his stories and art.

Furries in the Dark (or FitD) started out as the Furry Shoutout which ran from September 2015 till the end of the year. A simple art stream that allowed the audience to create the picture. However Due to low attendance the Shoutout only lasted 3 months before finally being scraped. Before it was officially cancelled, Whitefire started a second stream (FitD) to help create more furry friendly programming on the weekends. This one started late night and was ran as a conspiracy show. Interest peaked but quickly diminished until Whitefire began playing 70s and 80s music. Since then, attendance began to grow again and seems to be holding steady and continues on to this day on Friday nights on Furstream.

The Most Evilest Art Show

The Most Evilest Art Show[edit]

Currently, Whitefire is developing a new You Tube show called the "Most Evilest Art Show". This show stars Whitefire and Walter C. Evilest, a hapless evil 'genius' bent on ridding the world of all art. Not because he hates art but because he's color blind and feels cheated that he can't enjoy art like everyone else. The show's premise is to teach people how to draw thru simple tutorials and comedy skits.

Whitefire appeared as a guest on Oh! Pawpets! Show. (episode 1/30/2016) He is also going through the process of being selected as a cast member as a supporting actor for the future 8th season of the show.

Whitefire was an MP in the United States Army and deployed in support of OIF (Operation Iraqi Freedom) in 2009 with the 1st Calvery stationed in Ft. Hood.