West Corner Of the Park (comic) 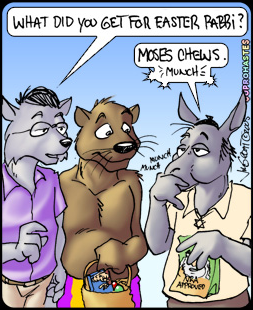 Moses Chews: Approved by the NRA

West Corner Of the Park (or WCOTP) was a comic based around the denizens of FurryMUCK, although it often commented on issues of interest to the wider furry community. It was drawn on a weekly basis by Jim Groat, and coloured from June 2003 to June 2008 by Cuprohastes, and subsequently by Crowley.

The name was derived from FurryMUCK - the real West Corner of The Park is the centre of the FurryMUCK universe, being the place where new characters emerge from (under the bandstand), and is generally the focal point of much of the MUCK's activity. Some of the comic's content was derived from conversations here.

The strip occasionally aired the author's political views. It frequently depicted obituaries of both favored and disfavored persons, with favored ones such as Bob Hope and Ray Charles being escorted to heaven, while Yasser Arafat and Saddam Hussein were taken to hell.[citation needed] The deaths of prominent artists and entertainers were also noted.

The many running gags at WCotP included:

Newcomers and critics accused WCotP of simply not being funny. While it is true that many of the jokes require knowledge of the characters or locations that is not presented in the comic, the strip's fans countered that the gags and characters were always intended to be in-jokes meant to cater especially to the MUCK community (and that, as Jim Groat produced the strip for free, he had no obligation to meet the standards of an outside audience).[citation needed]

The strip usually took a break the week during and sometimes before a convention attended by Groat, followed by the previous weekend's public art jam before new strips resume. If the strip was late being posted, Cuprohastes usually blamed Space Weasels as the cause on the WCOTP Livejournal community. (The WCOTP community is no longer being updated.)

As of May 2007, the comic (along with the rest of GraphXPress) was reportedly banned in Qatar.[1]

Cuprohastes quit colouring WCOTP after the March 16, 2008 strip, though he continued to colour the WCOTP cover up to "Book 10". He claimed in July 2008 not to have been paid for this work. The comic ran in black and white for several weeks until colouring was taken over by Crowley who was asked to continue colouring in the style used by Cuprohastes.