A wemic (also known as a lion-centaur, liontaur, or leotaur) is a fantastical creature found in role-playing games (such as Dungeons & Dragons) and some modern fantasy literature. They are occasionally the subject of furry art. Wemics have a humanoid torso, the head of a human or lion, and the body, legs, and tail of a lion. Thus, they resemble centaurs but with lion parts in the place of horse parts. They are a type of taur and also a type of felitaur. 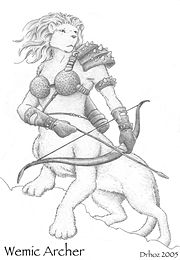 The lion-centaur appeared briefly in ancient Assyrian art during the Middle Assyrian period. Known as the urmahlullu, the Assyrian lion-centaur was a creature that protected washrooms, possibly from the evil demon Sulak, who resembled a mundane lion – according to "Mesopotamian Protective Spirits" by F. A. M. Wiggermann.

A similar but very rare animal in European heraldry is the sagittary - a half man half lion figure similar to those used to depict the astrological sign Sagittarius, the man half with a drawn bow. It features as the personal heraldry of King Stephen of England. 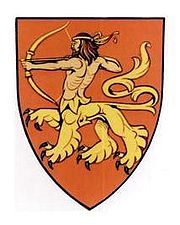 Invention of the modern Wemic[edit]

David C. Sutherland III, the artist who painted the covers of the first edition Dungeons and Dragons' Monster Manual and Dungeon Master's Guide, created the modern-day wemic for a game product called "Monster Cards Set 3", a first edition Dungeons and Dragons supplement released in 1982. Wemics entered the 3rd edition of Dungeons & Dragons in the accessory Monsters of Faerûn, which also introduced the mountain wemic: essentially the same build, but the lion portions replaced by those of a large puma. Mountain wemics are slightly smaller than common wemics and generally solitary.

The human part of a wemic has feline characteristics – always around the eyes and ears, and perhaps in the nose and teeth as well. Males are generally represented as having long mane-like hair.

According to the Dungeons & Dragons books, Wemics are excellent hunters and fighters. They do not make settled homes, but generally follow the herds they hunt for food. Some have compared them with the aboriginal people of the central plains of North America.

Wemics are larger and stronger than humans. A wemic can leap up to 50 feet with a running start. Their front claws are sharp, and they can fight with both claws and weapons at the same time. Some gamers have suggested that they are keen of eye and ear, that they can roar, that they can rake with their back claws, and so on, but these options are not universally used in most role-playing games.

It may be hard to imagine what wemics are like, since they are not only different in race, but in form. Take sitting, for example. When a wemic must be still for a time, telling stories around a fire, pausing for a meal, waiting for a friend, or just to take a brief rest, the Wemic commonly assumes a posture in which his hindquarters rest on the ground as his front legs remain straight and his forepaws stay flat on the earth. This they call sitting. This is different from a Wemic sprawling (both hind and forequarters on the ground, but with torso upright) or laying down.

A nomadic, stone-age folk, wemics are often represented as barbaric, illiterate, and uncivilized; they are famous for being highly superstitious. Others would describe Wemics as nature-oriented people with a rich tradition of oral history – they live close to the earth and are in tune with the magical forces around.

Wemics also appear as one of the playable species in the Maelstrom Live Action Roleplay system, based in the UK. However, in this system they appear as highly cultured, bipedal felines, rather than quadrapeds. Wemics in Maelstrom are roughly divided into two main groups - those from Amun Sa and those from Tritoni, although some also reside in the Free Islands. This said, individuals or small prides of Wemics are still found all over the Known World.

A similar creature, called a liontaur, appears in the 1992 Sierra Entertainment Quest for Glory III computer role-play game by Lori Ann Cole and Corey Cole. It first appeared in Quest for Glory II as a single character, before making its appearance as an entire tribe of such creatures. There was a similar creature in Quest for Glory I, called the cheetaur. It resembled a wemic, but with the skin colouration and appearance of a black panther. The cheetaur was more beastial than its liontaur cousins, being little more than a rampaging monster (as well as the fourth deadliest living creature in the valley, after the Antwerp, Minotaur, and Saurus Rex).

In World of Warcraft, there are the Tol'vir, only found in the zone called Uldum.