Weasyl is a social art gallery website, intended to to serve artists in both the furry fandom and the broader online artistic community. Weasyl is "a social gallery website designed for artists, writers, musicians, and more to share their work with other artists and fans." [1] The project's stated primary goals are to provide a secure and easy-to-use site that grants its users the greatest possible margin of artistic freedom. As of May 2014, Weasyl hosted over 600,000 submissions, with 69,000 registered users, 51,000 journals and 36,000 characters.[2] 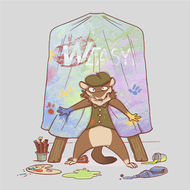 Illustration by Stereo, used to convey that the site was still a work in progress.

Serious development on Weasyl (then known as the Fergal Project[3]) began in early September 2011, with the intention of it being a simple gallery site exclusive to the furry art community; however, as development progressed and new features were added, the scope of the project expanded beyond its original intentions.

In October 2011 the project underwent major architectural changes (including a change in programming languages) in order to support a larger userbase and more advanced features. By the end of that month, a demonstration website was made available for users interested in testing the in-progress site.[4] Beginning in January 2012, the codebase underwent yet another refactoring phase coinciding with an upgrade away from its original user interface. The original site staff was also largely formed during this month.

Weasyl LLC was formed in March 2012,[5] becoming the website's operating organization. About three months later, staff launched a two-month long donation drive for site start-up costs, with a target goal of $5000. Donations of $5 or more earned the donor an invite to the beta release.[6] On August 1, the drive came to a close, with over 200 people donating a combined $6015.[7]

In June 2012, Weasyl presented a panel at Anthrocon, where a new user interface was demoed for the audience.[8] The panel met with a positive reception. Weasyl's forums opened July 26, two months ahead of the planned beta launch.[9]

Weasyl was slated to be released into open beta during the summer of 2012;[10] the launch was later moved to "late-September" 2012.[11] On September 30, the site came online, but was taken offline a day later to resolve "obvious issues",[12] remaining offline for a week, before being brought back online.

On February 14th, 2013, in celebration for Valentine's day, Weasyl went into Open Beta mode, meaning an invite is no longer required for account creation.[13]

On March 1st, 2013, Benchilla stepped down as an officer of Weasyl LLC[14] amidst accusations of Weasyl staff sockpuppeting on Fur Affinity's donation drive journal.[15] However, Benchilla has since stated that the accusation is simply a rumour, and to not believe anything without "actual physical evidence."[16] He has since officially relinquished any stock in the LLC as of December 2013, leaving Kihari to be the sole proprietor.

In November 2014, staff chat logs were compromised via a moderator account in an incident relating to removal of a journal linking to accusations of rape against another member.[17] Staff were "virtually certain"[18] that the owner of the account was responsible for leaking the logs. While they did not name the moderator, Wag had been removed from the staff page within the previous week.[19][20] On December 16th, Wag confirmed via a Twitter post that he was removed due to the logs being leaked, but claimed he was not responsible. He additionally included information in his statement that claimed Weasyl had found a security issue that may have resulted in his account being compromised, despite their public statement claiming otherwise.[21]

The site boasts a number of features:

The mascot of the website is Wesley, an ermine dressed in a beret and vest whose tail is usually tipped in wet paint (as he frequently uses it as a paintbrush). His markings change with the seasons, adorning him with either his summer or winter coat as appropriate. The mascot was originally designed by FayV, who created the character after input from the rest of the staff. Since the character's inception, Wesley has been drawn by many different artists.

Weasyl is partitioned into several units, most of which appear to be virtual machines (using VMware ESXi[22]), providing what look to be the following services:

The names effigy, eisler and median are mentioned in the context of handling requests, as were carlotta (to early January 2014) and saturn (to mid-April 2014).

The site has been hosted by EGIHosting (a Hurricane Electric reseller) since mid-December 2013.[23]

In October 2014, Weasyl acquired a 32TB 12Gb/sec SAS disk array with SSD cache and an additional dual 1Gbps network card.[24][25][26] The announcement came as current submission storage reached 75% of capacity, and coincided with a series of DDoS attacks on major furry art sites, resulting in a burst of Weasyl users (which may have driven upgrade requirements).