The term "weasel" usually refers to any of three archetypal species:

Although little-seen, these species are widespread and highly successful throughout the northern hemisphere.

In addition to the better known species, there are a large number of exotic and obscure weasel species such as Mustela sibirica (the kolinsky, or Siberian weasel) and Poecilogale albinucha (the north African striped weasel).

The diminutive size and elongate shape of a weasel is both a strength and a terrible curse. A weasel is capable of working its way through any passage its head will fit through, allowing it to pursue burrowing rodents into their lairs where other predators cannot go. No part of their small, elongated bodies are far from the surface however, so weasels lose body heat at a tremendous rate. The furnace-like metabolism required to offset this energy loss forces them to be hyperactive, voracious hunters. A weasel needs to hunt successfully 5-10 times each day to keep from freezing in an arctic environment. 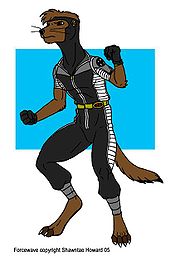 Forcewave, a fictional weasel character in Extinctioners
The ermine's white coat was a symbol of purity in medieval Europe. Folklore held that an ermine would rather die than be sullied, and that it could be trapped if encircled by filth.

European folklore also holds that stoats can hypnotize their prey by dancing.

The weasel is supposedly the only animal capable of killing a basilisk.

The kamaitachi ("sickle weasel") is a supernatural Japanese weasel which moves too fast to be seen and attacks by cutting its victims with a sickle.

For the Klamanth people of Oregon, Mink is a mythological hero and Weasel is his troublesome younger brother.