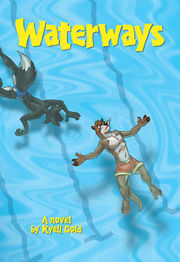 Waterways is an anthropomorphic novel by Kyell Gold, published by Sofawolf Press and first released at Further Confusion 2008. It won the 2008 Ursa Major Award for Best Novel.

The novel contains Kyell's popular stories from Yiffstar, Aquifers and Streams, as well as a previously-unpublished third section, Oceans. The story concerns the life of Kory, a teenage otter in his first gay relationship, with a black fox named Samaki. The book covers the themes of coming out, religious views on sexuality, and the troubles faced by gay youth.

John Nunnemacher (known as Cooner on Fur Affinity) did both the book's cover as well as the interior illustrations.

A 10th Anniversary Edition was released at MFF 2017, containing two extra stories. One, which follows Nick after Kory leaves for college, is from his compilation book of side stories from several of his own different works entitled Twelve Sides, and the other is a story written specifically for the 10th anniversary edition, which is centered around Kory and Samaki in college. Dev Miski from the six Out of Position novels appears in that story.

Kory is a teenage otter about to finish his junior year of high school and has just recently been dumped by his longtime otter girlfriend Jenny, due to his perceived apathy and lack of fulfillment towards their relationship. He stressfully lives under the strict roof of his deeply religious mother and his fun-loving little brother Nick, however happily attending mass each week to hear his favorite pastor, Father John, a sheep, give sermons. One day, desperate to clear his head, he visits the smaller municipal pool as opposed to his school pool and, while swimming, is accidentally bumped in the head by a sleek, handsome black fox, who quickly apologizes and introduces himself as Samaki. Despite forgiving him and assuring the fox he is okay, Samaki is upset about potentially hurting the otter and offers to treat him to a coffee, slipping him his phone number in the process.

After talking on the phone for hours with him and eventually seeing a movie together, the two bond quickly and Kory begins to have romantic feelings towards the fox. Convinced and conflicted of homoesexuality's sinfulness, he consults Father John who encourages him to consider what God wants for him.

While hanging out one night, Samaki finally admits to being gay and being interested in him. Still unsure of himself, Kory unconvincingly tells the fox he is only interested in girls but would love to remain friends. However, despite trying to justify his heterosexuality by thinking of his unfulfilling relationship with Jenny, Kory begins to find himself repeatedly fantasising and jerking off to thoughts of the fox, eventually deciding that it is not sinful to simply give him a try to see where it goes.

After weeks of staying over at each other's houses and trying to get him alone to make a move, finally one night, during a heartfelt conversation about Kory's dad leaving an amazing son, Kory gives in and embraces the fox in a cuddle, confessing to actually liking boys all along. After sharing warm kisses on the bed, they give each other handjobs and quickly fall asleep together.

Meanwhile, Kory's mom has begun cracking down on Kory due to his perceived indifference about getting into a good college like Whitford and Forester. However, Kory finds out that Samaki's father works at the lesser State University in order for their family to afford to send Samaki there. Kory wants to attend college with his new boyfriend but also does not want to disappoint his mother by attending a "lesser" school. On top of that, he now must juggle the stress of his religious mother and his homosexuality; he tells himself if he can simply make it to college, he will no longer have to worry about it. Samaki and Kory spend the summer going over to each others' houses on the weekends, secretly cuddling and having sex while at Kory's house.

Samaki begins inviting Kory to help out at the Rainbow House, a homeless shelter for gay kids and teenagers who have been removed from their homes. While there, they befriend a cynical female bat named Malaya who was taken out of her abusive father's house and is tired of the endless optimism of the House leaders. One day, she runs away from the House to live with her dad despite the danger of his violently homophobic tendencies.

Despite Samaki and his family's readiness to accept their relationship and not care what others think, Kory cannot bring himself to fully embrace his feelings in public out of fear. When Samaki expresses his desire to become roommates once they attend college and to attend senior prom as his date, he cannot hide his fear and does not commit to either one immediately, frustrating the fox more and more.

During dinner one night, Kory's family is interrupted by a call from Samaki telling him that Malaya was attacked by her father and is in the hospital; despite his attempts to get his mother not to come out of fear of her homophobia, she insists that she drive him and Nick to the hospital. Malaya is shaken up but okay; no longer able to lie to her anymore, Kory confesses to his mother that her father hit her for reading a magazine with women in it, claiming she would burn in hell. After his mother expresses sympathy for the sins Malaya is struggling with, Kory defends her and retorts that there is nothing wrong with her. Incredulous, Kory's mother asks if he has been dealing with similar sin, quickly blaming Samaki for planting the ideas in his head; she claims that she can find camps over the summer to "fix" Kory, expressing relief that he has not acted on the sinful thoughts. Kory's expression is all it takes for her to realize she is incorrect; dashing into his room, she loudly declares she hates Samaki's fox smell and must clean the carpets of it. Feeling hurt and betrayed she would insult his boyfriend, he angrily yells that she is a bigot. Furious that he has defaced the Lord under her roof, she kicks Kory out. Nick can only watch as he leaves with only the clothes on his back and calls for Sal to pick him up.

Kory politely refuses to live at Samaki's house due to not wanting to be a burden, which saddens the fox. Soon, Kory quickly adjusts to his new life staying at Sal's, happy to be free of fear of his mother, and begins looking at colleges once again, this time with Samaki, paying closer attention to financial aid as he must now pay for it himself.

Once again on his own, he again cannot bring himself to move in with Samaki and instead chooses to live at the Rainbow Center, hurting the fox deeply. During a confrontation between the two, Samaki accuses the otter of always keeping him at arms length despite his desperate attempts to get closer, still upset at his reluctance to accept his invitation to the prom. Kory claims he has given up everything for him: his mother, his best friend, and his home. Samaki asks if he is simply wasting his time in a relationship with someone who is too scared to commit; the otter tells him he just needs space, leading Samaki to sadly walk out.

Unsure where to turn, Kory visits Father John and discusses God's endless love for him. After calling the fox on his way home, leaving a message apologizing for everything and begging for another chance, he returns to the Rainbow Center and learns from Malaya that she enjoys watching the two of them together; seeing them so happy gives her more hope than anything at the Rainbow Center ever could. Just then, Kory receives a call from Samaki and the two reconcile; some time later, Kory and Malaya have rented an apartment together just in time for Christmas. After taking Samaki to Father John's Christmas Eve service, the pair and Nick happily converse with the sheep until Kory's mom enters and sees them together, angrily forcing Nick to hurry up while ignoring Samaki's good-natured politeness towards her.

Kory spends Christmas with Samaki's family, whose happiness being in each other's company reminds Kory of Christmas with his own family, bringing tears to his eyes. However, this is cut short by Nick informing him that he will not be coming over; Kory's mom had originally been planning to invite him to their Christmas dinner, but after seeing him with Samaki at church, she thought he was simply trying to spite her. He angrily calls his mother, accusing her of making everything about her; after she hangs up, he hears that she has removed his name from the voicemail.

Following Christmas, Kory's birthday rapidly approaches. At the party at Samaki's house, Malaya surprises the whole group by delivering envelopes from Forester University; Samaki is awarded a full scholarship while Kory is eligible for sufficient financial aid. Overcome with excitement that they will be attending college together, Kory finally agrees to attend prom with Samaki, who, overjoyed, kisses him. Kory is excited but still feels anxious about being the only gay couple there.

With prom coming up, Kory begins to find himself overcome with fear about attending with Samaki. After getting fitted for tuxes together a few days before the dance, Kory tearfully confesses over the phone his reluctance to attend, offering to treat him to dinner in its place; dejected and wanting to discuss in person, Samaki sadly tells the otter he loves him, but Kory cannot bring himself to do the same. The next day, Samaki outwardly expresses his frustration that Kory is too scared to be with him and show his true self around other people out of fear; Kory begs to just give him more time to get more comfortable, saying he will try his hardest. Samaki concedes that his best is all he can ask for and embraces him. However, Kory notices a mother watching them and once again pulls away out of fear, prompting the depressed fox to leave for good.

Following the missed prom, Samaki begins acting distant and avoiding Kory, even going as far as suggesting he may attend State instead of Forester with him. Depressed and confused, after a swim at the municipal pool, he starts to accept that he and Samaki will always be friends regardless, helping him feel better. Later, Samaki attends Kory's graduation ceremony, and the two joke with each other easily, calming the tension between them. Kory's mother also attends; while posing for his family picture, she stands behind him and waves to her friends, angering Kory that she only has interest in showing him off. In the spur of the moment, Kory rushes to bring Samaki and Nick to the picture, protesting that if it is truly a family portrait, she should not be in it. Kory receives congratulations from his fellow classmates for his bravery, and he and Samaki finally make up.

In the epilogue, Kory and Samaki attend an group meeting at Forester. The pair introduces themselves, with Kory talking easily of their relationship. Later, Samaki asks to make sure he is not pressuring Kory into anything, which he confirms. They share an embrace as a fellow student walks up to them, saying he never expected to meet other gay kids there. The pair invite him to dinner, admiring the sunset.