Wadey Jackson, better known under the name "Wadey" is a British furry hailing from The UK. Depicted as a Red Hyena in appearance; the character was inspired by The Lion King, and has a book series that spans to about three books. All of which haven't been created as of yet due to time constraints. The Titular Hyena is described as being Loyal, Friendly, Temperamental, Confident, and is always willing to learn new things. His involvement within the fandom began in February 2017. and has expanded drastically over the years, crafting some of the most influential diverse Ocs and continuing to expand on his story as a result. 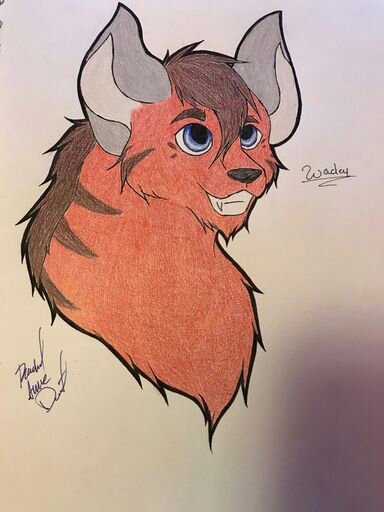 The Titular Protagonist Of Rouge Crocuta; designed as a way to combat stereotypes associated with the Species and Spread a good light on Hyenas as a whole. (Art by Kyrah) 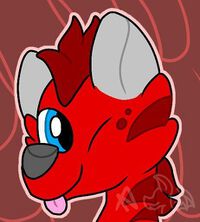 According to the Creator; He was created back in the early days of his education, his evolution and involvement never really took off at first, until a now defunct account under the name of XxDisneyLoverxX illustrated the first ever drawing of Red Wadey; which inspired the owner to start improvising on the new outlook and eventually start his own storyline under the heading of "In the View of the Hyena" The first, fully fledged, Single-written novel to date that has since dug its way into the literature, as of writing this, the book is current being redrafted for sufficient revamping. While, The characters are still being figured out piece by piece.

Wadey is often described as being Heroic, Funny, Active, Cowardly, Loyal, Slouchy, Intelligent, Smart-Mouth, Discreet, Dirty-Minded, Young-Spirit, Learns pretty fast, efficient in vocabulary, Flirty, isn't easily manipulated. But there are rare occasions. Kind. A Little Haughty. Curious. Likes to butt in. Has a bit of a temper that sometimes causes him to hurt others' feelings. But he doesn't mean it. his attire is bare-boned at best, prior to his anthromorphisation, thanks in due to a laser blast from an Intergalactic race of Aliens known as Agromorphs. From there, his attire generally has changed over the years. a few outfits include:

Junkie; Based on the Scavenger Trait, Wadey is oftentimes seen sporting a tool belt, a pair of steampunk-esque goggles, and a flowing African scarf. This look is worn due in part to not only show his profession, but to also convey that he has a sense of formality, even covered in dust, as he leads a group of Resourceful Hyenas into collecting Scrap; Metal, Wood, or otherwise, that can be used to craft spectacular inventions. He is considered a foreman in some aspects. Though, this attribute is merely a guess. He took up the roots of this operation to avoid having to fight Zatik; a long-term enemy and one he wanted to avoid for the longest time.