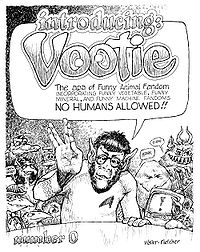 Vootie was a cartoonist's APA with a funny animal theme that lasted from 1976 to 1983. Satirically self-described as "The Official Organ of the Funny Animal Liberation Front," the purpose of Vootie was to gather like-minded cartoonists to share and discuss their ideas on funny animals in an un-serious fashion.

In early 1970s comics fandom, APAs were the social links used by fans with specific interests to stay in touch and share their thoughts. The vast majority of zines were exclusively text, while any mimeographed art or photos in them were usually secondary, since the majority of fans were not artists themselves.

By contrast, Reed Waller and Ken Fletcher were both Minneapolis cartoonists who had a shared in MAD Magazine, underground comics, and the genre of funny animals. Most comics fans in the 1970s discussed superheroes, meaning that fans of alternative comics had little to no ways of keeping in contact. Waller and Fletcher started Vootie on February 29, 1976 as a way to "encourage artists to cartoon in a humorous and experimental style: Funny Animals", as well as provide "a place for cartoonists to show other cartoonists their work."[1] The title of the zine was a reference to a MAD parody of J. Fred Muggs, the mascot of NBC's Today Show in the mid-1950s, as a nod to the zine's underground influences. [2]

Origin of Omaha the Cat Dancer[edit]

Taral Wayne, a Canadian science fiction fan and artist, claims responsibility for writing a postcard to the editor Waller that simply stated, "There's not enough sex in funny animal comics.".

Waller responded by publishing the first episode of Omaha The Cat Dancer in Vootie #8.

38 official issues, plus four art jam co-ops, were sent out before Vootie's dissolution in February 1983. Former members of Vootie, Marc Schirmeister and Timothy Fay, went on to create Rowrbrazzle the same year, which itself distributed its first issue in February 1984. The transition between Vootie and Rowrbrazzle is considered by historian Fred Patten to be when funny animal fandom became furry fandom, although the term "furry fan" did not exist until 1986.