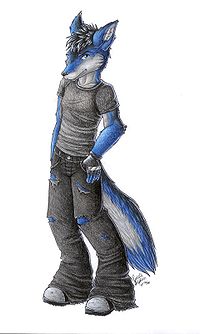 Varmit Coyote (Used to go by Kamui Shirou, also goes by Grandiloquence) is a coyote furry who lives in Virginia.

Varmit was introduced to The Furst State, Delaware's local furry community, by his friend V and is an active member as of 2008. He served his country as a member of the United States Air Force from 2006 to 2010 and was deployed in Kuwait from winter 2008 to June 2009.

His fursona, Varmit, was given its name by 2 Gryphon.

He is known much better by his YouTube username, VarmitC, and he runs the unofficial 2 Sense archive on YouTube; The2Sense.