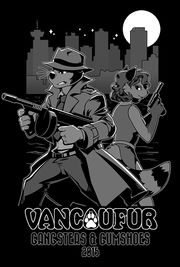 VancouFur 2015 was the fourth instance of the VancouFur convention. It was held over March 5-8, 2015,[1] at the Executive Inn and Conference Center in Burnaby, British Columbia, Canada.[2]

VancouFur 2015 saw 724 attendees,[6] and 141 fursuiters in the fursuit parade.[6] At the closing ceremonies it was announced that the following year VancouFur would be moving to a larger venue in the nearby city of Richmond. [7]

Trapa was elected chair for the 2015 convention.

Cekuba was elected as Vice Chair for the 2015 convention.