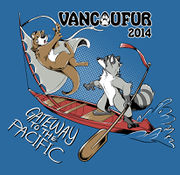 VancouFur 2014 was third instance of the VancouFur convention. Expanded to four days of events, it was held between February 27 and March 2, 2014,[1] at the Executive Hotel and Conference Center in Burnaby, British Columbia, Canada.[2]

Theme - “Gateway to the Pacific”[edit]

VancouFur 2014 continued the convention’s tradition of appropriating its theme from the local culture; in this instance, “the pacific rim countries and multiculturalism there is here in Vancouver.”[3] “Gateway to the Pacific” focused on the diverse menagerie of cultures around the Pacific Ocean, and peoples from those countries that have chosen to make their homes in Vancouver.

They showcased a new banner image on their website and social media each month that celebrated one country on the pacific rim and also put up a Theme Page that gave some insight into how they could be connected to vancouver.


The final months banner was opened up as a contest with the theme of "Canada" and put up on their website.
February - Canada - Art by Ceowolf
(Other Canada banner entrants were put up on various other galleries as site banners. They included Bloopbeepfook's piece and Vestra's piece)

The guests of honor were fursuit-makers BlooFox (Zay) and Wolever Wuff of Fox Closet.[4]

In October 2013, Fox Amoore was announced as a guest musician.[5]

2014 was the second year a local non-furry artist was brought on to create a GOH Dinner cake. Mother to one of the staff and definitely a furry ally, Julie (http://juliesmixedmedia.com/) created an "around the world" GOH cake. The figurenes were crafted by Temrin and Soulscape[6] Julie posted about it on her instagram afterwards. (Other images of the cake)

Kubaryi was re-elected chair for the 2014 convention.

Mediar was re-elected Vice Chair for the 2014 convention.

There were 600 attendees, including 123 fursuiters in the fursuit parade.[7] The attendees raised $1700 for the convention's charity, VOKRA.[7]