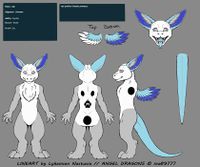 VampiricIce is a fursuiter and YouTuber blogger who lives in Ironwood, Michigan, USA

VampiricIce feels she has been a furry since the age of ten, but joined the fandom at age twenty-two.