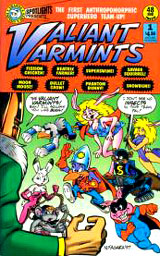 Valiant Varmints was a one-shot comic published by Shanda Fantasy Arts under their SFA Spotlight banner in 1998.

The superhero team of the same name consisted of (in order of appearance) Moon Mouse, SnowBuni, Beatrix Farmer, Superswine, Savage Squirrel, Bullet Crow & Phantom Bunny, and Fission Chicken. Other members of the team not featured, but honourably mentioned are, Erma Felna, Liska, Corus, Red Shetland, the Tank Vixens, Milikardo Knights, Collars & Cuffs, and the Extinctioners. Like the Justice League of America they're based on, the Valiant Varmints have a secret hide-away, a super computer with wall screen, a slick looking jet vehicle, and a sense of self-importance that doesn't quit.

The story based on the typical framework of JLA with individual episodes centered on every character, finishing as a group team-up that forces a final showdown with the villain. Shane Fisher and Mike Curtis, who created the concept, wrote the framework. The episodes were written and illustrated by the character creators (in the same order Carl Gifford, Jeff Wood, Taral Wayne, Gary Fields, Kjartan Arnorsson, Chuck Fiala, and John P. Morgan.) Throughout the book clues appeared in each episode. While the individual writer/artists were free to write nearly anything they wished, they had to incorporate one of these clues, provided by Mike Curtis.

A second issue was planned as a crossover with DC Comics, to be entitled Captain Carrot and His Amazing Zoo Crew vs. The Valiant Varmints, but when licensing fell through, another tale was planned to include Atomic Mouse.