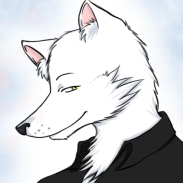 Valdyr Nordvindr, usually referred to simply as Valdyr, is a furry primarily known as a FurNation administrator. Valdyr is a relatively recent member of the furry fandom, having only become active around 2008.

Valdyr's fursona is an arctic wolf.

He is also a relatively young member of the fandom given his position, being in his late teens.

Valdyr currently resides in and operates out of Larchmont, New York.

Valdyr's fursona is an arctic wolf, depicted as having a slender build and a penchant for intellectualism. He notably lacks the addition of supernatural or fantastical elements often present in individuals' fursonas.

According to Valdyr, a reason for this is that the fursona is meant to reflect the human Valdyr as accurately as possible.[1]

Prior to position with FurNation[edit]

Valdyr, though still relatively little-known, was a complete unknown until somewhat recently. Before working for FurNation, he mostly occupied his time socializing, roleplaying, and as a passive fan, though he has dabbled slightly in both fandom-related drawing and writing.

After FurNation returned as a Ning network in late-2009, in early 2010, Valdyr was added to the administrative staff as the community once again expanded. Valdyr and Trun are the current webmasters as of October 2010.

Outside of the furry fandom[edit]

Besides his furry activities, Valdyr is passionate about an eclectic array of intellectual topics, such as philosophy, the study of which take up a large portion of his energies. He also enjoys mountain biking, and is an artistic photographer.

Valdyr works part-time with actual wolves at the Wolf Conservation Center in South Salem, NY, and is involved with several other environmentalist causes and organizations.