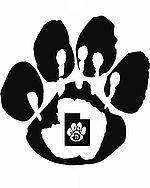 Utah Furry Forum was the name of a furry group centered in and around Salt Lake City, Utah with members all along the Wasatch Front from Ogden to Provo/Orem, and stretching as far as St George

It was also the name of the mailing list that has been used by the group to coordinate and arrange their activities. This list was originally hosted on Yahoo! Groups under utah_furry_forum. Eventually they started their own forum, located at UtahFurs.net.

The Utah Furry Forum welcomes and accepts memberships from any furry or anthro-fan in Utah, or any other person wishing to keep in contact with the Utah furs.

Current Moderators (as of January 2019)

The UFF was founded on April 1, 2006 by the original six members after they had issues contacting a group called "Utah Furs." The founding members voted to have Saebian Frobosh create and lead the Yahoo group. After a slow first year, when membership got big enough, he assigned Moderators from different furry circle to help get everyone's voice heard. The first recruiting letter read:

Several Furs including myself. Have decided to reform the old UtahFurs Yahoo Group. All resident Utah Furries are more than welcome to join. Currently we are organizing events at the end of every month. Our activites usually include regular Furmeets, Laser Tag, Movies, Fursuit collaberations, and just about anything else we can think of. It's an open forum, and everyone is welcome to participates in planning, so join up and give us your input. At: Http://groups.yahoo.com/group/Utah_Furry_Forum/

We are also in the process of designing a UFF Webpage where we can track all of our activites, post pictures and accounts of past furmeets as well.

My personal hope is that we can bring all of the scattered Utah Furries together into a thriving community.

As of September 2010, the group had around 225 members on the mailing list and the monthly meets attracted anywhere from 30 and 50 people.

In the past, the responsibilities of these moderators were largely limited to the usual tasks that come with maintaining mailing lists: welcoming new members, answering questions, etc.

More recently, these responsibilities have expanded to include coordinating activities at the monthly meets, operating an IRC channel on Anthrochat (#UtahFurs), working on relationships with local businesses and institutions and maintaining a database of fur-suiters for activities.

Members are not limited to the events and activities that the moderators come up with, and are encouraged to use the mailing list to arrange and coordinate their own events. 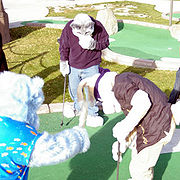 As well as the monthly "coffee meet," which is just an excuse for people to get together, meet each other and make conversation, the UFF has recently had bowling and mini-golf meets (with and without fursuiters) and will coordinate anything from shooting trips and barbecues to laser-tag and sushi runs.

Members from the UFF can be found at Biggest Little Fur Con, Further Confusion, and RainFurrest (these being fairly close to the Salt Lake region) and less occasionally at other conventions. Members who are interested in going to conventions frequently coordinate to split travel and boarding costs.