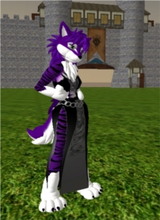 Wolfee Darkfang (also known as Yiffy Yaffle in Second Life) is a female purple and white furred SpiritWolf Fursona with mystical powers. The owner of this Fursona is a Furry Artist. Wolfee is a spirit guide descended from a ancient destroyed kingdom known as the Darkfang Empire. She was frozen for over a millennia to escape the wrath which consumed the empire. She died shortly after being thawed from her frozen stasis. The guardians of the after life sent her back to the mortal world, to complete some unfinished business, which she still is unaware of to this day. Her new body is capable of shape shifting, and made of a spiritual essence which cannot be harmed. She is very noisy, but equally kind hearted, fun loving, and cheerful. She is renown for her famous quote from a Second Life Gesture which makes her say "Weee!" Following with a back flip and 2 barks, thus adding to her cuteness factor.

Wolfee first came into public acknowledgment in 2002 when she managed a dream in Furcadia known as Darkfang Island, where she ran a wolf pack simulating a medieval kingdom setup in the imaginarium. Her friends and visitors role played the parts of the story. Eventually the dream dissolved when the users slowly backed out of Furcadia. When it was down to just herself and one friend, she closed down the dream, ending it's 2 year lifespan in 2004.

Wolfee has a Second Life account by the name of Yiffy Yaffle.

In early 2006, after a meeting of all furry and/or furry-friendly sims' administrators or owners was held to discuss several unifying strategies regarding the fandom population within SL, she was entrusted with the design and creation of what it is now considered the official identifying symbol for all furry presence within this world.

In February 2007 Wolfee created a YouTube account where she began uploading comical videos taken of her Fursona in Second Life. Her most popular Videos are "Wolfee the Dancing Queen", and "Wolfee Acid Rave Gir Spin" which was a parody of the famed LeekSpin joke. The Gir spin video gained popularity and was aired on the Funday PawPet Show as well as the family cable channel Nickelodeon (TV channel). She continued to upload more and more funny and informative videos since.

January 2008 some trolls began a group on YouTube known as the FCTC (Friend Chicken Trolling Crew). One of their tasks was to phish the account passwords of the furry users. They began by tricking multiple furries into viewing a off-site recreation of YouTube, by giving them a TinyURL link through the websites Private Messaging and Bulletin features disguised as concerned warning for them to look at a video which turned out to be a RickRoll. They successfully hacked several accounts. Some of the accounts were salvaged by their original owners, some got suspended for being used to violate the terms of service, while 2 of them stil remain. The remaining phished accounts are DrewTheWolf and AB1987.

This phishing site looked exactly like YouTube, but was on a Free Web Hosting site displaying youtube as a sub domain. It would prompt you to log in upon loading into the page, which you normally wouldn't need to do if you had been on the official YouTube site. Wolfee Quickly alerted her friends, telling them not to visit this link and told them why. She then contacted the domain provider and had the account suspended, providing a warning it may happen again. This action made her a target for the FCTC, as they took notice and began to troll her. They gathered her Real Life information possibly from online public listings, and posted it on their own wikipedia as well as a YouTube Video which is no longer available do to the troll who uploaded it being banned for violating the privacy act within the YouTube terms of use. They continued to upload the video on new accounts getting banned again, do to the YouTube Community Guidelines forbidding users to create new accounts once they are banned.

They attempted to alter her WikiFur Article to reflect her the phished Information, which was quickly reverted by a administrator who issued a Anti-Vandalism lock to prevent further attacks. A month later A troll claimed to discover a account on Beast Forum. Wolfee denied ownership, as well as her friends who've known her for years. The account dated back 3 years ago. The forum software is several years out of date, and the free version of Invision Board which was discontinued a few years ago. It was highly vulnerable to hacks and exploits. Her friends believe the account had been time reversed by a hack. The trolls requested her to prove it isn't hers, while her friends wish the trolls to prove it is. Lots of theories have been passed along, all being shot down by trolls who stick by their story uncaring of other peoples opinions.

The trolls went out of their way to track down the websites and Online Games Wolfee attended, filling her DeviantArt and FurAffinity accounts with spam. They created a Encyclopedia Dramatica article on her filled with mostly false information. They tracked her EverQuest II character known as Eschia, and began sending the character loads of hate mail through the games in-game MailBox system.

Trolls got their hands on a private yiff chat log between her and another furry. This chat was not publicly available, but was given to them by the other furry involved in the yiff. To this day Wolfee doesn't know why the furry did this, but no longer trusts them. The trolls then exposed this Yiff over a YouTube Video in a attempt to humiliate her. However most of her friends didn't see it as condemning since they knew it was a privacy violation and know yiffing is nothing to be ashamed of. They also harassed Wolfee over her home phone, which caused her family's Life Insurance Business to lose money in fear it could be one of the stalkers rather then a Client. The family debated changing the phone number, but decided to wait on that because they knew the stalkers would eventually get the new number. The stalkers used Skype to call them, leaving their numbers untraceable.

Three and a half months later the Beast Forum account was suddenly hacked, filled with racist comments, obscene death images, and Nazi symbols. This brought the believability of it belonging to Wolfee to non existent. It was then no longer usable as evidence to convict her of Zoophilia, though the trolls still try to say she is into it with no convincing proof to back up what they say. During this Furry War she managed to bring into the open some serious hating trolls, giving off a good example of the worst kind of troll you could deal with. Trolls such as Empiroqkriticizmus and Jumpacliff2.

On September 15, 2008, Wolfee's main Youtube account was compromised by a malicious user named FrizzleFry101, who claims to be a member of the Patriotic Nigras[1]. During the event of the account being hacked, Wolfee maintained a secondary account in the interim, using the name "ShayndrelWolf". While under this name, Wolfee and friends contacted YouTube customer support to regain access of the main account. The trolls grouped together to maliciously abused the flagging system in a attempt to have Wolfee removed from YouTube permanently, only to find Wolfee to return the very next day. Wolfee now has full control over their YouTube account again. Wolfee has had to change several passwords and email addresses, due to them being brute forced by the same malicious user that took their YouTube account.

On February 19, 2010, Wolfee had quit the YouTube Furry Drama. Although claims they are not finished with the community for good. He continues to make videos, but either related to Second Life, or directed at friends.