Torwin is a Border Collie Fursuiter. Born in Manchester, England, he grew up in Prince George B.C and Chemainus B.C. Currently living in Maple Ridge B.C.

Into the Furry Fandom Headfirst...

Found the Fandom online, was introduced to fursuits by Samwise Husky at a Lace's Birthday party. Saw the performance aspect and decided fursuiting was for him, after his many years in theater.

Went to first convention at Rainfurrest 2008 and has attended every year since. 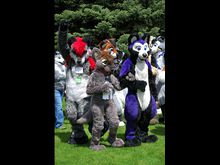 In March 2009 Torwin moved to Surrey, Vancouver and acquired house. The House had 6 bedrooms and was quickly filled, and coincidentally, made up entirely of Canines, Sparking the nickname "The Dog House".

Torwin started seeing Jessie around this time, they had met before at a party, but only briefly they later ran into each other at Bowling, and hit it off, and the rest is history... 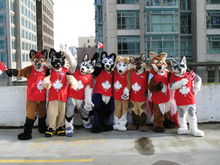 Torwin and Ruggs founded the Doghouse Originally. They moved in Pennie-less and broke eating KD out of $1 Dogbowls and using they're wrenches as forks for several weeks. They had an old couch, an xbox and an LCD Projector to play it on the wall.

Sairys was the first to move in, followed shortly by Jack, Orion and Lemony.

Ember Fox moved in...that's when things got real interesting! The parties at that point were insane, someone put their head thru a wall at the last party of that particular house!

Within a year, they had outgrown the house, and didn't like the neighborhood, since everyone was working, they could afford to upgrade. The First House was in the Whalley area of Surrey. They moved to the much nicer area of Guildford and remained there for 2 and a half years.

Ruggs got called back to New Zealand for a business opportunity he had been working on in the past and had to move suddenly. Torwin took this very hard, at this point, they may as well have been brothers.

Haloth moved in to take Ruggs space and lived there for about a year before deciding it wasnt for him.

Frio and his Mate Sikkab moved in after that and the Crew remained until The Doghouse Closed.

The landlord decided to sell, so rather than move everyone (again) Torwin opted to split The Doghouse, so he could move closer to work and focus on his own life, rather than looking after everyone else.

4 Years and 2 houses later, Torwin closed the Doghouse, and the "Crew" went their separate ways.

Torwin and Jessie.T Wolf now reside in their own place in Maple Ridge, with "Jack" one of the original members of the Doghouse.

Torwin now has his own shop, where he spends his evenings and weekends, Jessie has a large fenced backyard for the Dogs

These days he spends his time working and fixing his Porsche on the side. He also takes care of the lighting and effects for Vancoufur and Howloween

In June 2013, Jessie came back from visiting her family in Toronto, and decided she missed her old life there and wanted to be closer to family.

Torwin and Jessie Separated shortly after, but remained living together while she saved funds for the move at the end of October.

Torwin Announced the reopening of The Doghouse August 2013 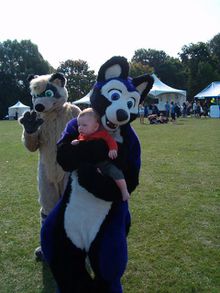