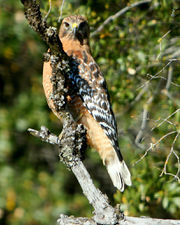 Red-shouldered hawk
The hawk is any of a group of diurnal raptor birds of the taxonomic suborder Falcones of the order Falconiformes. The term hawk sometimes includes falcons. Hawks and falcons have been semi-domesticated and used as hunting birds (Falconry) for centuries.

Hawks generally have broad wings. Open-range hawks (particularly of the genus Buteo, AKA Buzzard Hawks) have long broad wings and are known for their typical gliding flight pattern.

Forest hawks (like those of the genus Accipiter) have shorter wings and proportionally longer tails than open-range hawks. This configuration allows faster turning and more maneuverability. Forest hawks are generally don't soar.

Falcons have long narrow wings are are built more for speed than soaring. The Peregrine Falcon, Falco peregrinus, is the fastest bird on record, reaching speeds of 200 mph in a stoop (a kind of speed dive).