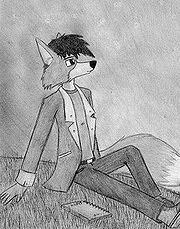 Hello, my name is Cane McKeyton. I am a fox furry and in relation to other people in the fandom I'm still relatively new.

I began drawing in 5th grade. My first characters were anthropomorphic bunnies and were unknowingly my first step to becoming a furry. My next phase was in 7th grade middle school. It was then where I created Cane. At the time I was unaware furries or the fandom but looking back now I see that I was the spitting image of a budding furry. It was in 9th grade where I first encountered furries on the Internet. I had accidentally come across deviantArt and realised that I wasn't alone in my feelings and there were others out there like me. In 2006 I created an account on dA and started to become an active member of the furry community there. And that's pretty much it and here I am now, writing this article.

For awhile I thought that the furry fandom was a well known community, seeing as how many people were engaged in it but as I began to get more integrated I realised this was not true. Furries are relatively unheard of to the general public and those who do know of it usually bear a negative view of us. What little media coverage we do get is usually very slanderous and stereotypical, portraying furries and nutcases in animal suits with serious sex addiction problems. I Do not support over sexuality or yiff in the fandom. For this reason I tend to keep my furriness hidden and secret, even from some of my friends. Can the fandom be saved, I think so but it will take a lot of effort to turn that blightened image around and show people that furry art can be a beautiful and tasteful thing.