Calvin Rabbit is a British furry from East Grinstead, West Sussex. His fursuit is homemade and first appeared online on Friday 13th November 2020.

Calvin's fursuit consists of two bodies; a slimmer fitting plantigrade body and a baggier digitigrade body with upholstery foam down his legs held in place with velcro. His main colour is pampas brown and he has a cream coloured chest. Most of the material and equipment was bought from Ebay with a few pieces from Amazon. Including equipment, Calvin spent about £400 to make the two bodies, a pair of gloves, a head, and two pairs of feet, one for indoor use and one for outdoor use. 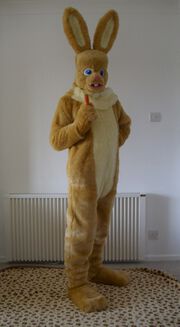