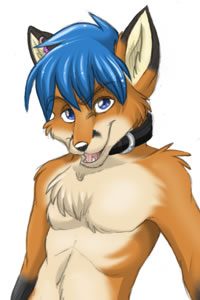 Born in Lisburn, Northern Ireland in 1986, this shy fox is full of surprises for those he comes to trust well enough to call his friends. Having moved around the country due to his father previously being in the army, he's fairly well travelled around the UK, but still enjoy's journeying around to meet up with friends from both ends of the country.

Currently working at one of the world's largest international airports for a ground handling agent as an Aircraft Dispatcher.