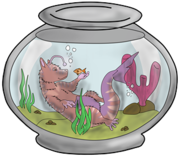 Seapups mainly lives on the sea floor of deep oceans but very rarely on land in deep dark caves. This species is closed and was created by Allana Heart 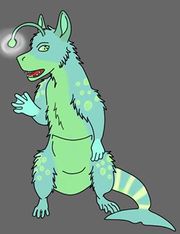 Most are confused when they see a seapup as they have the tail of a dolphin, a shark pointed dorsal fin, a squirrels small body and a head that looks like it should belong to a puppy. They all have a single antenna that has a glowing bulb on the end of it that changes color depending on their mood.

While their pupils have split into three dots that form a triangle. when fully expanded they can cover the entire eye rendering it black. And all of their toes/fingers are webbed 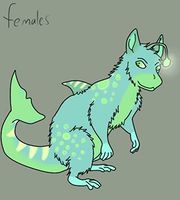 Females are lighter in color, have a single dorsal fin, a single set of ears, as well as a pouch on their belly for their young 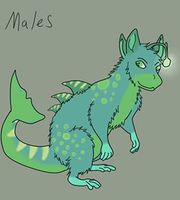 while males, on the other hand, are darker in color, have 2 sets of ears, and 3 dorsal fins (each smaller than the one before it) 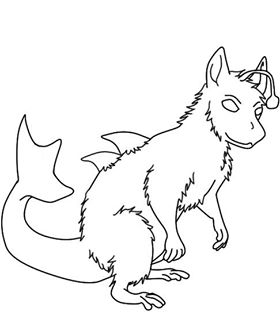 (Credit to DragonFurProductions for the idea) Non-Binary seapups are special as they have 2 dorsal fins, a single set of ears and a pointed tail fin that resembles a trident. These pups have no restriction on the darkness/lightness of their colors 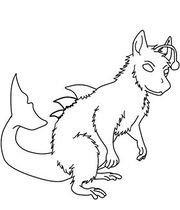 Trans males have had a harmless and safe surgery to give themselves the distinct triple dorsal fins you see on normal males. They have also had their pouch removed 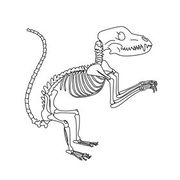 Its believed that the seapups are a species of alien due to their genetic and physical makeup. Their lungs are able to quickly change between being able to breathe underwater or on land(why they have no gills).

Despite being skinny their bones are on the dense side allowing them to walk along the sea floor with ease.this does make them slow swimmers, however.

Their pupils split as they did to allow better contracting and expanding allowing them to see better than those who can eat them.when one was caught and tested on by scientists they found that their fur had water repelling properties that allowed them to stay dry despite being underwater

They will eat anything that they can fit in their mouth from other sea life to plants. They have been known to eat their dead

Their mating season is around late November early January. They are a polyamorous species but some will mate for life 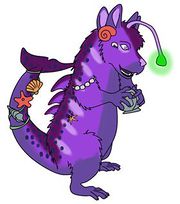 Males will adorn their fur with pearls and seashells while "decking out"their burrows. The males with the flashiest and nicest burrows attract mates

males have a slit instead of a sheath. Mating is extremely left field and way out there(they are some kinky little creatures)

How the offspring is born[edit]

If mated females lay one egg which they protect in their pouch. Their offspring may continue to use this pouch as a safe space for 1-2 years after hatching

due to dense bones, they are slow swimmers. Their small size and glowing bulb usually cause them to be a snack for larger animals. However, due to their split puples they are able to see better than most(if not all) creatures in the sea and because of their small size getting into small places is no problem.

If a seapup is trans or nonbinary these traits below can be swapped around.

Newborns do not hatch with antenna nor a fully developed tail. The cartilage in their ears and dorsal fin/s also take a while to harden and stand upright. their pupils are also a single large circle. At age 5 is when they move into their child stage

Children are more curious and no longer need their mothers pouches for protection. They play daily with other sea pup babies. They are considered children until age 14

By now their tails have fully developed and their pupils have split into the 3 dots you see in the adults. They have begun to form strong friendships as well as understanding the basics of hunting and living without their parents

Come age 18 males will leave home. They are brash and quick to get themselves into trouble. They have a period of exploring themselves and finding out who they are while being on the search for a space to call their own

Females will stay in packs with their mothers and other females until they find a mate. By age 18 they generally have a good idea who they are personally

Age 30is when they are finally considered full-fledged adults. Females can have up to 5 childern in their lifetime. And many do not live past age 45

If your seapup is male they must look like the male sea pup above in the post. Same if it is trans, non-binary, etc. They MUST ALWAYS follow their genders rules, no exception.

If you wish to make and sell these as adopts you must be a seapup owner for 2 two weeks before you can do so as well as get permission from me! Anyone who gets an adopt from you must come to me to get an owner certificate. If you do now have an owner certificate you do not have the rights to own anything resembling a seapup (As an adopt maker for them you will have access to our PSD file that has bases for them).

Seapups are not allowed to have wings, mouth tails or extra body parts OTHER than what corresponds to their gender. They are however allowed to be missing arms or legs. You are allowed to draw them in the candy/stuffed animal gore style. You can also draw them where you can see bone(however! You cannot do em like a skull dog)

Other than the "lighter in color/darker in color" thing there are no color restrictions so if you want a sparkle dog style seapup to have at it.