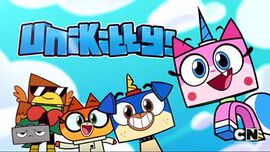 Unikitty! (2017-2020) is an animated television series produced by Warner Bros Animation for Cartoon Network. The series follows the titular character Princess Unikitty and her friends as they do whatever it takes to make any day the happiest and most creative ever, and face off against villains such as Master Frown from the city Frown Town among many others and spread happiness.

The series was first previewed on October 27, 2017 with the episode "Spoooooky Game", followed by two other sneak peek episodes, "Sparkle Matter Matters" on November 17, 2017 and "No Day Like Snow Day" on December 1, 2017, while the series officially premiered on January 1, 2018 with the episodes "Action Forest", "A Rock Friend, Indeed", "Fire & Nice", "Kaiju Kitty", "Kitchen Chaos" and "Crushing Defeat" and concluded on August 27, 2020 with the episode "The Birthday To End All Birthdays".

The series ran for three seasons and 104 episodes.