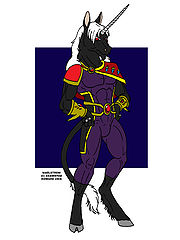 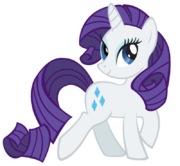 The unicorn is a legendary creature that resembles a horse, with a single, often spiral, horn growing out of its forehead. This horn, often called the alicorn is said to have miraculous healing abilities, including the ability to neutralize poisons and other toxins.

The qilin, a creature in Chinese mythology, is sometimes called "the Chinese unicorn", but it is not directly related to the classical Western unicorn. Currently, the word "kirin", in Japan, written with the same kanji (Chinese ideograms), is used to designate the giraffe as well as the mythical creature. Strangely, the Japanese mythological creature is usually portrayed as more closely resembling the Western Unicorn than the Chinese qilin, even though it is based on the Chinese myth. They can have one or occasionally two horns.

Unicorns typically have many character personality traits attributed to them. Due to the range of mythology and differing perception of their symbolism, western unicorns and eastern unicorns (Kirin or alternatively Qilin) are somewhat distinct from one another, modern and traditional unicorns vary to a lesser degree as well. Some classical and popular traits:

Modern fantasy fiction tends to perpetuate the medieval notion of a unicorn as a beast with magical qualities or powers. Unicorns notably appear in: