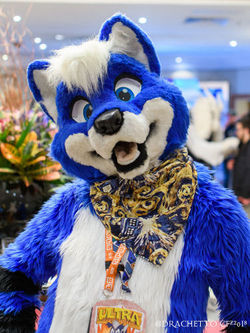 Ultra, also known as Ultra the Happy Blue Fox, HappyBlueFox on Second Life (real name Nick), is a British fursuiter who lives in Northampton, United Kingdom.[1] He is mainly active in the Midlands, regularly attending BrumFurs as well as LondonFurs and SurreyFurs.

Ultra's fursona is a male anthropomorphic fox, with blue and white fur. Royal blue body, with a white underbelly, and two thick black rings around each arm and leg. He has a blue head with a shock of white hair mohican-style between his ears, white jaw, snout and cheeks, with a pink tongue. Finally, he has blue eyes and a permanent happy smile. [2]

After searching the internet for What Animal Are You? quizzes, Ultra decided upon a fox as being the closest match to his personality traits. Next was to decide upon the name and as blue is his favourite colour, it was important to decide upon the shade. After trying Cobalt, Mystic and Starlight, he chose Ultramarine and tried to register as Ultrafox (a wordplay on the 1980's band Ultravox) however he discovered that there was already a well respected artist by that name and registered as UltramarineFox. After a couple of years, the name got shortened to Ultra and developed to become the Happy Blue Fox.

Ultra commissioned U.S. fursuit maker OMG Pineapples to make his first fursuit which debuted at ConFuzzled 2014. It was seeing the suit's happy face on 17 May 2014 that solidified his character.