UberQuest is a webcomic by Skidd and Phuufy.[1] The webcomic currently updates on an irregular basis, from as often as weekly to as long as monthly.

UberQuest is a scifi/fantasy/drama webcomic set in a fantasy realm named Evyr . Three races inhabit the four kingdoms of Evyr: the Fera (mammals), the Dahaki (dragons), and the Avion (avians). [3] All are anthropomorphic animals with a variety of fantastical abilities.

The world of Evyr has many magitech contraptions used in a variety of ways, from the mundane to military-grade weaponry. The story follows a group of unlikely companions as they embark on a quest that slowly unveils an ancient mystery with power-sources known commonly as 'Ubers', along the way various factions rise to power as the world becomes more turbulent with the brink of war and political espionage afoot, all fighting for power.

The story of UberQuest follows Sesame, her life is turned upside down after her village is attacked by a group of raiders, her father is slaughtered in the mayhem. Homeless and alone, she embarks on a quest to find her sister Soya who will hopefully aid in finding out more information and enacting vengeance on behalf of her home. Along the way, she runs into a mage-in-training named Kibbles (Kibella), who was tasked by her teacher Winsley to seek out Sesame and follow her. Later, during a fight, they run into a mysterious futuristic teleporter holding Claire, an eccentric engineer, and her robot companion Proto, eager to return home.

The three also run into Farron a shady merchant rat out to get rich and Mason a weary blacksmith venturing out on his own for the first time. Meanwhile, in the capital of the Kingdom of Alder Kylar, a skilled archer and high-ranking knight, finds himself tasked with a covert mission to find a noble from Prince Drayven, who is next in line to the throne. Prince Drayven is approached by the ex-royal-mage and now Necromancer, Valmont, to make a secret allegiance to gain political power, using their undead army.

Various factions seem interested in ancient-artifacts known more commonly as Ubers. Including an uprising rebellion known as the Severance, various Kingdoms, and a mysterious group known as Zysa. Along the way, the group finds themselves entangled a world increasingly in turmoil, with a war on the horizon, factions gaining power with an arms-race for the power source of the Ubers all while the past of Evyr is slowly unveiled. 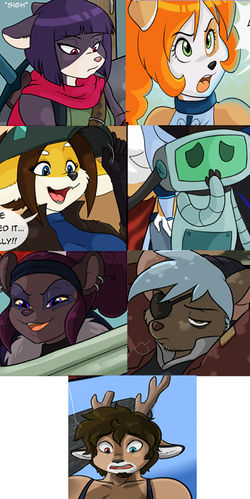