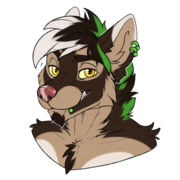 Tyke Braxe (born March 21, 1994), is a furry artist, writer, musician and animator who lives in Cheshire, United Kingdom, though he is of Danish heritage.

Tyke has lived in the United Kingdom for most of his life. He studied Performing Musicianship and Sound Production in Manchester, and has taken online courses in the study of grey wolves and theoretical physics.

His hobbies revolve mostly around the creative arts. As a musician, he specializes mostly in percussion, but also sings and plays guitar. He has played with a Stevie Wonder tribute band.

A lover of wolves, Tyke has "adopted", through sponsorship, several wolves through the nonprofit organization Wolf Watch UK. He also donates to Cancer Research UK.

Tyke's home furmeet is Manchester Furs. Tyke does character artwork, primarily furry artwork, and animation, which he studied at the university. He also writes short stories.

Tyke's fursona is a brown-and-beige furred wolf with green, white, and black accents. The character is portrayed as a dominant figure, outgoing and leaderly.