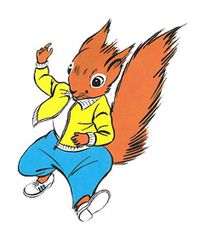 Tufty Fluffytail is a young anthropomorphic squirrel who is a character used by the Royal Society for the Prevention of Accidents (RoSPA), a British charity which aims to promote safety. In particular, Tufty demonstrated road-crossing safety to young children.

Tufty was born in 1953, the creation of Elsie Mills, MBE.[1] Through RoSPA, Tufty introduced simple safety messages to children, through stories in which the squirrel was joined by Minnie Mole and the naughty Willy Weasel, along with Mrs Owl the teacher and Policeman Badger, who always popped up in the nick of time to save the children.

In 1961, the Tufty Club was set up as a nationwide network of local groups,[1] and Tufty appeared as a cartoon character in a Public Information Film.[2] At its peak there were 24,500 registered Tufty Clubs.[1]

During the 1970s, Tufty featured in a series of stop-motion animations[3] narrated by Bernard Cribbins.[4]

In April, 2007, Tufty made a cameo appearance in the British science fiction/police procedural television series Life on Mars. In the penultimate episode, DCI Gene Hunt dresses as Tufty in order to escape detection when being sought for murder.[5][6][7]