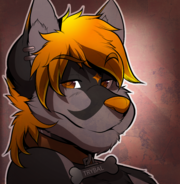 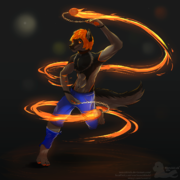 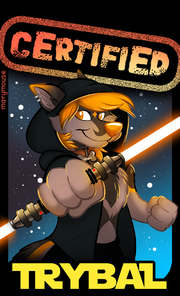 Trybal Wolf is a furry lifestyler who lives in East Lansing, Michigan, USA.[1]

Trybal Wolf grew up in Clio, Michigan. He is a biohacking and transhumanism enthusiast with multiple implanted microchips and a radioactive glowing tritium implant. He is a regular contributor on biohack.me, (profile here), a forum dedicated to discussing the augmentation of the human body with technology.

He is also an avid cyclist and former bicycle deliveryman, and loves to spend hours riding his bicycle.

Trybal has held many positions in his short lifetime, seldom working only one job at a time. He began in manufacturing, progressing to retail, customer service, arcade maintenance, and operation, and later dove into the food and beverage industry as a barista. He later took up positions in advertising and marketing, outside contracting, delivery. He currently works for a local restaurant as a cook. All in all, he has more than 9 years of combined job experience in 10 industries

He is also a studio assistant at Cantus Fluere Studios, a recording studio owned and managed by Aura Fluere that can be rented hourly for various services.

From an early age, Trybal had an obsession with canines. He was fascinated by Disney's Robin Hood, Universal Studio's Balto, and any other media that involved anthropomorphic animals.

The journey that led him to the furry fandom was a long one. At an early age, he drew animal characters to represent himself. At the age of 14, he was introduced to the flow arts which later led him to discover rave culture. It was through rave culture that he was first made aware of the fandom.[clarify]

Trybal's fursona is a black, grey, and orange wolf.[2]

Though he has never left his original fursona, it has undergone several slight revisions over time. The first rendition of the character was finished shortly before MCFC 2014.