When used in terms of the furry fandom, it is generally in the context of changing from a human form into an animal one. Shapeshifting, or transformation, can have several meanings in the fandom. For furry lifestylers, it can reflect an interest in the fantasy of "being" their animal, and the earnest desire to one day wake up and see their human-ness gone. It can have aspects of sexual fantasy, especially in the case of unwanted involuntary transformations forced by others. It can reflect an active spiritual or oneirological state of human-animal changes, as found in therianthropy. Or it can refer to biological or cybernetic changes, either in real life or in science fiction, to make a person more animal-like.

Shapeshifting is typically a one-way route in furry fan stories and art; the goal is to become animal, often a quadruped and in some cases anthro or taur, rather than return to humanity. The main difference is in were stories where, due to traditional genre conventions, an aspect of returning to being human for at least a short time is often included. Some transformation stories may have people turn fully into bestial animals, rather than anthropomorphic ones, losing all human level or reasoning and intelligence. 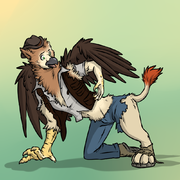