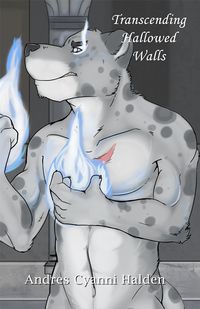 Transcending Hallowed Walls is a furry novel by Andres Cyanni Halden. It was published by FurPlanet in November, 2010,[1] and is the third volume in Halden's "Paladin Trilogy", following Within Hallowed Walls and Beyond Hallowed Walls.

Set in the sword-and-sorcery world of Bestira, the Paladins of the Hopegiver have been called to save the country of Vasani from High General Takashi Ironskin. In order to do this, the paladins must activate the Light of Creation, a warhammer so magically powerful it can kill a god.[1] Four paladins - the wolf Vorel, the fox Rasvim, the mouse Acton, and the Wolfen Mier - travel to the K'Mir Empire in hopes of finding the Font of Light. In order to survive the journey, they enlist Trent, a defector from the empire, to lead them through its toxic deserts.

As they travel through those dangerous lands, the snowcat paladin Torr heads north with a group of allies to try and rally old enemies of Takashi Ironskin to their cause. All of the paladins and their friends hold hopes that they can gather an army large enough to challenge General Ironskin's terrifying undead soldiers.