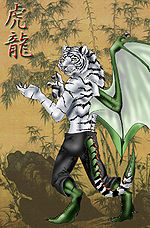 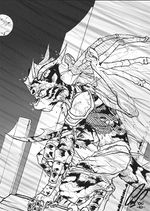 Torin Rasisolf was created as an antagonist to a short story in 2000 during writing class. The story was written as a final project for a Creative Writing class during Devin's senior year. The inspiration behind it came about due to the absolute lack of activity during the latter half of the semester.

Being fairly active in the online roleplaying community, Devin introduced this character into any setting that fit. His practice in this setting allowed him to finely tune his character as a character. Thus began the many years of "fine tuning".

About a year after Devin's graduation from High School, a dragon character was added into the mix as Torin's best friend. Originally, the two fuse bodies creating the tiger/dragon hybrid he currently ended up being.

The idea behind the hybrid was inspired from the DragonBall Z anime series. In his attempt to keep things original and interesting, he began work on finding a creative way to get these two together without taking the easy route.

Torin's physical appearance went through a few revisions before he found an artist on DeviantArt by the name of Carnival. It was then, near the end of 2006, that Torin became what he is today. The tiger in him represents the quiet and solitary nature of his personality. The dragon in him represents his patience and wisdom. Both together make for a fierce spirit that rarely ever gets tapped.