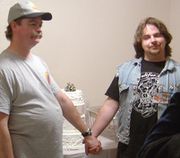 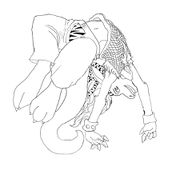 Toast once resided in Southern Orange County at the furry house commonly known as the Anaheim Fur House, with his then-fiancé 2, the Ranting Gryphon[citation needed] and his roommate and best friend Waggs Wulf. In his spare time he likes to fursuit around Los Angeles and Malibu.

Prior to the move from East Coast area of the United States to the West Coast in 2006, Toast and his late husband Pouchhopper held their pawfasting (wedding) on January 27, 2007, conducted by 2, The Ranting Gryphon.

During Anthrocon 2003, he passed out paint pens, asking people to cover his 1987 Lincoln Town car in furry art and signatures of the convention's attendees,[citation needed] with Babs Bunny and Revvy Rabbit helping kick off the project before his arrival, setting the stage for a follow up project.[clarify]

He has a firm belief that anyone can get in touch with their inner feral side if they wish so long as they open their heart to such things and embrace their inner self, whatever that may be.[citation needed]

Toast's fursona is a bunny by the name of Toaster, also known as Toast Rabbit. He's a toast flavored rabbit. Black and tan in color.

His former fursona was an 80's arctic rocker Kangaroo, taking visual appearances from Vince Neil of Motley Crue and his rock idol David Lee Roth. His character stands as the poster-child of the 1980s heavy metal stereotype.

In April 2008, Toast was named co-chair of the Southern California convention Califur.[citation needed] Califur was an extension of what once was the old ConFurence conventions which his late husband pouchhopper had been a large contributor to.

In [when?], Toast became a staff member of Antheria, in which he served in various staff roles.[citation needed]

Toast worked for the 2 Sense show as a technical director and show entertainer.

On the show, he plays his Toast the Rabbit fursona as a rebellious bunny who doesn't seem to know (or care) about a rabbit's place in the presence of predators. His Bunny Holidays skits are often centered the listening fan involvement, encouraged to participate by sending in videos or pictures, and/or explaining how they celebrate each Bunny Holidays.[clarify] 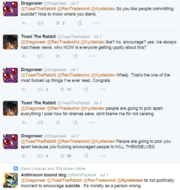 In December 2011, Toast was written up on Artists Beware for the non-payment of a commission.[2]

In July 2015, controversy on social media generated around Toast for his expressed perceived biased thoughts against people in polyamorous relationships,[3] and his encouragement of suicide.

In June, 2016, Toast was arrested by federal authorities on charges relating to the possession, receipt, and distribution of child pornography.[4]

Toast's ex-boyfriend, 2, the Ranting Gryphon, stated this was due to not knowing what was in a Zip file,[5] but the court documents stated that the distribution happened in December 2011, and the receipt in February 2012, months apart, and files depicting child pornography were found on multiple devices.[4] On November 5th, 2018, Toast was sentenced to 70 months in prison, a mandatory mental health assessment and lifetime probation after pleading guilty to the charges of child pornography possession. [6]