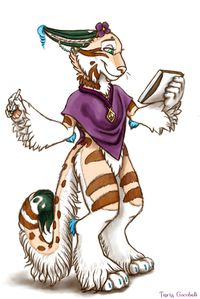 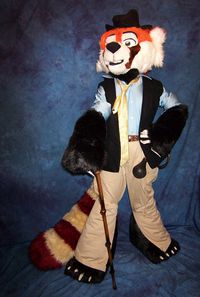 Tig's fursona is a female Eurasian Lynx hybrid. Her personality is a gentle, mothering character who is creative, artistic and loves to spread happiness and peace to all. She has longer ears that have long tufts of turquoise hair at the tips which corkscrew and hang down. Her tail is around the same length and fur-thickness as a snow leopards tail with long silky hair that extends from the underside, similar to a saluki. Below her elbows and hocks is an large amount of silky fur called "feathering" which you would normally see on horses like Gypsy vanners and Clydesdales. Her body build is short with digitigrade legs and long lanky arms. Her main colors are peach and white, with forest green ears, grass green dots on her eyebrows, and turquoise fur tufts on her elbows, hocks, and ear tips.

Tigris often wears a purple daisy on her right ear, a gold peace sign charm on a purple ribbon necklace, hippie clothing like ponchos, patchwork skirts and bellbottoms. She also wears round Lennon glasses, but she rarely wears them in public. [1]

Tig had an interest in drawing when she was 7 years old, and taught herself how to draw. She always had a fascination with old films, time travel, and 60s British Invasion bands. Her artwork reflects these things.

There are two fictitious tribute bands that are mainstays in her gallery, The Fab Gears (The Beatles) and The Prairee Chikens (The Monkees).