Thomas James Lux (GearOtter, mzk49o1/MZK490-1) is a Canadian born artist and photographer who resides in Winnipeg, Manitoba. His artwork is often identified throughout the fandom by his trademark logo involving the silhouette of an aircraft and depicts subjects of a similar nature.

He represents himself as an anthropomorphic Cape fox pilot.

Thomas Lux first appeared in the fandom in 2002 under the alias of Glennoar, drawing and writing furry stories about his tigress character Cait the Bowhunter and other Redwall themed works. Since 2005 he has since been known as GearOtter and illustrated post-apocalyptic scenes featuring an otter character named Linkev Christenen before drastically changing over to images with a more aeronautical theme.

Lux has an avid love for aviation and flying in general and has on many occasions, expressed a strong desire to become a commercial pilot. He is currently earning money towards this particular aspiration. His other interests include the paranormal, music of all genres, paintball, and spending time outdoors. Much of his personal life, political views, and opinions are generally kept private.

As an artist, he tends to draw extensively detailed scenes that depict both his fascination for flying as well as scenes showing day-to-day living and situations, some of which may be metaphors for his own life. Much of his work deals with Lux and his relationship with an otter/tigress hybrid named Dexter. His primary medium is Adobe Photoshop.

Lux's creator also chooses to allow his personal works to be freely distributed and edited at will for whatever purpose, citing that if he were truly worried about art theft, he would not bother sharing his artwork online and with the fandom. 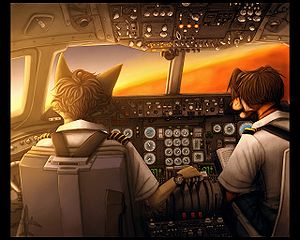 Thomas Lux in the cockpit, as depicted by GearOtter

Thomas Lux is a cargo pilot, flying the MD-11 and the DC-10 for a fictitious company called GlennAir located in Ashtyn, Calatona, a world of GearOtter's creation. He enjoys playing the guitar, reading literature, and playing games such as chess and pool and partaking in more self indulgent activities such as drinking and cavorting with fellow pilots, specifically his co-pilot Jacques "Jake" Verte. He has a rather spontaneous and impulsive personality which, according to his creator, often leaves him in hot water, especially when it comes to his numerous relationships.

His mate is Dexter Aermen, a fellow pilot, with whom he has two cubs named Daniel and Phoebe.