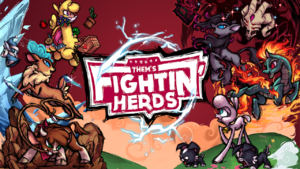 Them's Fightin' Herds is an indie fighting game developed by Mane6 and published by Humble Bundle. Atypical of most side-scrolling fighting games, it features a cast of all-female ungulate characters fighting each other to find a champion worthy of gaining a magical key that will protect their world from predators. First released into early access in February 2018, the full release was on April 30, 2020 for Microsoft Windows, followed by Linux on March 25, 2021 and a beta macOS version was added on October 27th, 2021.

The project is a spiritual successor to Mane6's original planned fighting game Fighting Is Magic based on the animated television show My Little Pony: Friendship Is Magic. Mane6 was a team of nine developers and part of the adult fandom of the show.[2] Fighting Is Magic featured the six main pony characters from that show. Early versions of this game were released in 2012, drawing attention from both players in the Evolution Championship Series due to the unique moves associated with non-bipedal characters in fighting games, as well as from Hasbro which owned the intellectual property to My Little Pony. After Hasbro sent Mane6 a cease and desist letter, Mane6 discarded the assets tied to the show, while keeping some of the fundamental gameplay factors to create the new title Them's Fightin' Herds. The creator of My Little Pony: Friendship Is Magic, Lauren Faust, offered to help with designing the new characters for the game.[3][4] The development of the game was completed with crowdfunding through Indiegogo.

A separate effort created by fans not associated with the Mane6 team released their Fighting Is Magic: Tribute Edition of the original Mane6 My Little Pony-inspired game in early 2014. This game was made from various beta assets of the original which Mane6 developed in the first two years, and were later leaked by other parties.[5]

Them's Fightin' Herds is a fighting game based on sapient four-legged hoofed creatures from the world of Fœnum, which is being threatened by the return of carnivorous beasts known as the Predators. The Predators were locked away in a separate realm, but they have found a way to escape it. To put an end to the threat, selected champions of the various Fœnum races are chosen as "Key Seekers" by their tribes to find the Prophet's Key that will lock the Predators away again. The Key Seekers must face each other in a friendly competition to determine which one will be the Key Keeper who will face the champion of the Predators.

Them's Fightin' Herds launched with six champions roughly based on the Friendship is Magic characters. A new, completely original character, Shanty, was revealed as downloadable content in August 2020.[6] Each champion has a unique fighting and movement style.