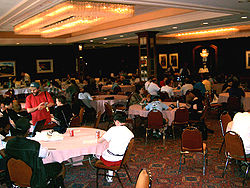 The Zoo is a customary area of the Anthrocon convention space (and, by extension, at other conventions), in which attendees may lounge freely, eat and drink, rest, draw, chat, and generally "decompress" from the bustle and crowding of the rest of the convention events going on around them.

The Zoo has existed as such in Anthrocon programming since 2000, except in 2005 as there were no rooms available to dedicate for the space, and because the hotel lobby bar was available for essentially the same purpose. There were also an open hotel restaurant and adjacent sitting areas throughout the lobby, ballroom, and mezzanine floor balconies which served as de facto Zoo space during the 2005 convention.

As attendance of Anthrocon grew, it became more and more crucial to provide adequate loitering space for congoers to congregate which is not immediately around doorways, elevators, and other public hotel-space which must be shared with hotel staff and guests not attending the convention.

As a large part of the 'experience' of Anthrocon is interpersonal socialization, the more customary convention programming is ultimately unable to suffice by itself. This, combined with the effects of jet lag (due to attendees traveling from across the country and even as far away as Japan), and sleep deprivation due to attempting to attend as many events as possible and meet as many people as possible within the general 4-day timeframe of the convention, gives rise to a definite need to have space more or less devoted to small-group socialization, and relaxation without the need to return to a hotel room (an increasingly arduous and lengthy endeavor as the ratio of attendance to convention space goes up).