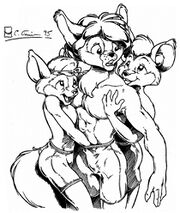 The Yiffy Guide to Safer Sex is a two page black and white PDF file created to explain safe sex to furries, and contains sexually explicit art. It is free for distribution online or in print format. The pamphlet was distributed at several conventions in the late 1990s. [1]

The pamphlet contains two pages of information about performing safe sex using furries as visual and textual aids. The first page begins with the basics of STD's and describes how to reduce the risk. About a third of the guide is devoted to proper condom use, storage, and disposal. The pamphlet includes a few paragraphs about safer alternatives to penetrative sex and ends with a paragraph about mutual consent.

All pieces of artwork are line-art heavy sexually explicit material, likely a conscious choice to make the file easy to distribute and appealing to the subject matter.

The pamphlet was distributed at several late 1990s conventions. About a couple of dozen pamphlets were often given free of charge with attendees asked to donate for printing costs. [2]

A parody pamphlet was also created, entitled Roadkill's guide to Sex at the con! .[3]

Despite the guide's best attempts to influence safe sex, several inaccuracies, misguided advice, and misinformation exist throughout the pamphlet. Notably, the comic focuses on HIV infection and groups STD's with them, leading to many false equivalencies. Some other examples include: