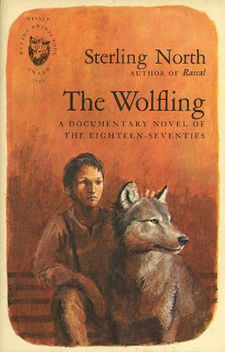 The Wolfling is the title of a documentary historical novel by Sterling North. It was first published E.P. Dutton & Co. Inc in 1969. It was winner of the Dutton Animal Book Award in 1969. It is illustrated by John Schoenherr.

It follows the adventures of Robbie Trent and his pet wolf in the 1870s, when flocks of passenger pigeon's still darkened the skies and wolves still roamed the American Midwest. Wolf is a tame wolf pup that was taken out of his den as a pup and raised by humans.

Wolf and Robbie have many adventures in the woods near their Wisconsin home which is across the fence from Swedish naturalist Thure Kumlien, a contemporary of Henry David Thoreau and John Muir. The book is thus filled with notes on the natural history of Wisconsin during the 1870s. There is a section of footnotes at the back that provides additional information about the facts presented in the book as part of the story.

This book is currently out of print.

Other Books by Sterling North: