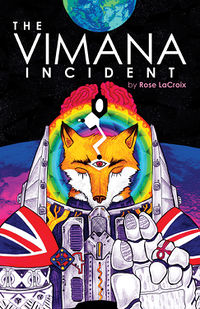 Cover of The Vimana Incident.

The Vimana Incident is a furry novella by Rose LaCroix. It was published by FurPlanet in February, 2015.[1]

The synopsis of the R-rated story reads:[1]

In her [2] for the release of the book, the author remarked:

[3], the story itself was in planning for almost two years but the first draft took only about four months to complete. The author also states that while most of the book's heavy Gnostic symbolism was deliberate, one symbolic thread was pure serendipity:

While much of the history in the story is close to our own familiar timeline, the story begins in 1939 during an aberrant timeline.

As explained in the story, the first major point of divergence is in late 1915 when a British munitions lab accidentally invents hybrid rockets. These rockets are developed into a usable weapon and deployed at the Battle of the Somme. Because of this, the First World War becomes a mobile war rather than a stalemate, and proves to be a more decisive victory for the allies.

The second major point of divergence is in 1934. In Germany, Adolf Hitler is killed during a Nazi party purge and Ernst Roehm becomes chancellor of Germany. In the United States, War Plan Red (an actual historical contingency plan for war with the British Empire) is leaked shortly after its publication, leading to frantic attempts to repair relations with the UK. As an urgent gesture of friendship between the two countries, a joint British and American expedition to the moon is planned and successfully lands a lunar mission in 1937. This along with the different party dynamic under Roehm pressures Germany to partner with Japan and Italy to create its own space program. Soon, however, the joint programs break down and each country now wants to start their own lunar colony to gain the ultimate strategic advantage over the rest of the world.

A few actual historical personages are mentioned, but only one (Gautier de Mortagne, the historical bishop of Laon in 1153) appears in the story.

In several instances the species of these historical figures is mentioned or hinted at. Ernst Roehm is an aurochs, Timothy Leary is a black-footed ferret, Theodore Roosevelt is a moose (and therefore, in theory, so is Franklin Roosevelt), Bishop Gautier is a lion, Gary Cooper is a red fox, and it is vaguely hinted that popular singer Vera Lynn is also a red fox.

The story covers several themes that are interwoven into the broader fabric of the story.

Prejudice is a strong, recurring theme throughout the story.

The protagonist, "Red Ned" Arrowsmith, is gay and his sexuality is a source of tension for the crew of the lunar mission which ultimately leads to an altercation with Captain Hawthorne. His experience includes near-misses with authorities and a disastrous experience with gay conversion therapy which causes him to contemplate suicide.

Prejudice also figures into the dynamic between the members of the crew, all of them belonging to different species and from different nations, when kept in close quarters with each other. In particular, there is an instinctive distrust between carnivores and herbivores that the crew has to constantly keep in check in order to keep relations from growing too tense. Tension also emerges as nationalism and the politics of capitalism, communism, and expansionism expose ideological differences and create suspicions among the crew.

While ufology is never directly dealt with, the name of the DSS Vimana is based on ufological interpretations of Vedic scriptures. There is also a brief mention of RAF Bentwaters (this is where Ned meets his wife-to-be), which is said by ufologists to be the site of a close encounter with an alien spacecraft.

Both Godric and Apollo are 33 years old at the time they discover the nature of their existence. This is a numerological reference with Biblical resonance as the age at which Jesus was crucified, with the implication that both have achieved an awakening of divine knowledge (i.e. Gnosis).[3]

The story also deals with deception, both by a malevolent deity (in this story represented by Ammut, who is based only loosely on the Egyptian demon of the same name) and by the self.

Egyptian mysteries are hinted at but very indirectly, both from the presence of Ammut and the symbol of Ankh on a ring that Ned purchased while working in Egypt in 1919. In many Western esoteric traditions, such as the Gnostic Hymn of the Pearl, the path to wisdom is sometimes described as an allegorical trip to Egypt. The Hymn of the Pearl is quoted on the last page of the novel.

At least one character contracts ergot poisoning. Ergot, a fungus which contains LSA (a precursor to LSD) is significant to the revelation of ultimate reality in the story. The book's diegesis of the dying process includes recent theories about the release of psychedelic chemicals by the brain at the moment of death, and makes reference to Timothy Leary's observations on the psychedelic experience as a parallel of the Bardo Thodol, or Tibetan Book of the Dead. However, no character deliberately uses a hard psychedelic substance in the book and the story does not necessarily encourage readers to use psychedelic substances.

By order of appearance:

Edward "Red Ned" Arrowsmith (1901-1957) is a Red Fox born near Salisbury, England. He works as an aerospace engineer. He is extremely skilled with machines, capable of spotting seams and defects in the precise equipment he designs that are nearly invisible to the naked eye. Ned is gay and his sexuality is a poorly-kept secret, which leaves him forever vulnerable to those who are hostile to him. He has a kind, thoughtful personality that more aggressive characters often use to control him. He is also a bit vain, forever obsessing about his appearance and in maintaining his image as a world-class professional. During his first appearance at the beginning of the book (in an alternate 1939 in which the space race preempted the Second World War) he is working at Bristol Lunar, a fictional branch of the Bristol Aerocraft Company. Later on in the story he appears in a timeline more like our own in which the war did happen, as an engineer working for the Armstrong-Siddely Motor Company in 1946. In this second timeline he is married, but the marriage amounts to something more like a friendship and he retains a male lover with his wife's consent.

Wing Commander Albert Enstone, an otter, is a Royal Air Force officer and astronaut (in the parlance of this alternate historical setting, a "lunanaut") in his first appearance in alternate 1939, and a former Spitfire pilot in his second appearance in the 1946 scenes. In the first timeline, he was the first terran creature to set foot on the moon during a joint British and American mission in 1937. In the second timeline in which WW2 wasn't preempted, he was injured during the Battle of Britain after landing his badly-damaged spitfire and walks with a wooden leg. In both timelines his military career began as a training sergeant in the Kings Royal Rifle Corps during the First World War. He later transferred to the RAF in 1917.

Captain Robert Hawthorne (1889-1942?) is a Lunanaut in the United States Army Air Corps. He is a white-tailed deer. He is calm, confident, and generally down-to-earth and approachable; however, he is extremely focused on the mission and has a tendency to become belligerent when he fears that the mission might become compromised. He wears a pair of silver presentation antlers, a common habit among cervines in the military in this particular setting. Cpt. Hawthorne began his military career as a pilot for the Lafayette Escadrille during WWI and became a flying ace with the 103d Aero Squadron in his Spad VII. After the war, he held the world record for solo flight from 1922 to 1925. Later in the story he encounters a museum exhibit from the future that predicts his death during a test flight at Muroc Army Airfield in 1942; however, it is never clear if he actually dies in 1942 or if the Medal of Honor listed among his achievements is a posthumous honor or one he has already earned.

Tom Ingerholt is an engineer for the Studebaker Motor Company's fictional lunar division. He is a gray wolf. He is Ned's American counterpart, and the two are close friends and long-time collaborators on the Anglo-American space program. Tom lives in South Bend, Indiana with his wife Margaret. His personality is much like Ned's, though his demeanor and manner of speech are more down-to-earth and he is less obsessed with appearances.

Lt. Viktoria Aksakova is an officer in the Soviet Air and Space Force. She is a European hare. Lt. Aksakova prefers being thoroughly engrossed in a task (such as monitoring systems or gathering intelligence) over taking a commanding role, but is perfectly capable of asserting herself when the occasion calls for it. She is asexual, which makes the unwelcome advances of some of her male colleagues extremely stressful and unpleasant for her.

T.I.N.A., which is short for Theriomorphic Interface and Navigational Aid, claims she is a holographic projection of the D.S.S. Vimana's computer. Her true nature is left open to interpretation but she is clearly not what she says she is, as she appears completely independent of the ship's computer at several points in the story. She takes the form of a yellow Labrador retriever. On the surface she is calm, professional, and detached but her true demeanor is cunning, manipulative, and ruinous to all who trust her.

Gerard, a European wildcat, is a Cathar perfect living in the 12th century (the nearest thing among Cathars to an actual priest). However, like T.I.N.A. he appears multiple times outside his context, hinting that he is more than what he says he is. Unlike T.I.N.A., his personality and motives appear to be benevolent and helpful.

Godric of Hereford (1120-1153?), born Menachem Ben Yitzchak, is a canon regular in the abbey at Laon, France. He is a red fox. Originally from the Welsh Marches and raised Jewish, he converted to Christianity at age twenty-one. Although it is never stated in what capacity, he was a supporter of the Empress Matilda's failed bid for the English throne during The Anarchy, and fled England for France after Matilda's defeat. Godric is extremely bright; he shows great promise as a theologian and speaks Welsh, English, Latin, Hebrew, and a smattering of French and Occitan (though neither particularly well). In 1153 he eats bread tainted with the fungus ergot and develops ergot poisoning, which leaves him gravely ill and possibly dead.

Apollo Morrill (born 2006), a red fox, is a historical fiction writer living in a small cabin in Humboldt County, California. In the story he appears in the year 2039, in the middle of work on his novel "Wake of the White Ship," which is set during the 12th Century Anarchy and the battle between Empress Matilda and Stephen of Blois for the English throne. One of his hobbies is Historic European Martial Arts (HEMA).