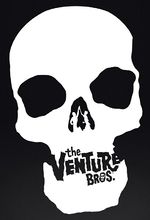 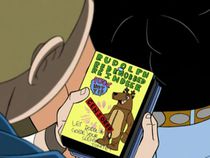 The Venture Bros. is an American animated television series which premiered on the Cartoon Network's "Adult Swim" on February 16, 2003. The series mixes action and comedy, and chronicles the adventures of Hank and Dean Venture, two dopey yet well-meaning teenage boys.

After the finale of Season 1, a Christmas special entitled A Very Venture Christmas was broadcast.

During the episode, Brock finds Hank snooping in his closet for Christmas gifts. Hanks covers up by claiming he was only searching for "the Christmas videos", and proceeds to pull out a number of pornographic video tapes with titles that parody various Christmas stories.

In addition to Miracle on 69th Street, Jingle Balls, and Frothy the Blowman, Hank finds a video entitled Rudolph the Redknobbed Reindeer. The cover art depicts a man wearing a reindeer fursuit with an obvious zip down the front, and a censorship bar extends from his groin area. Additional pieces of cover text proclaim "100% Hot Yif" (sic) and "Let Rudolph guide your sleigh tonite!"