From WikiFur, the furry encyclopedia.
Jump to: navigation, search
Culture > Publications > Anthologies > Single-author anthologies > The Streets of His City and Other Stories 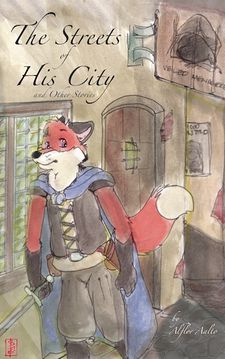 The Streets of His City and Other Stories is a collection of two furry novellas (Streets of His City and Their Labors of Love) by Alflor Aalto, along with several additional stories, accompanied by artwork by Fennec. The novellas were partially published in 2012 on SoFurry and Fur Affinity. This book chronicles the beginnings of Prince Natier's adventures, as well as the birth of his alter ego, Rivard.

This publication is part of the Llyran Wars series.

Young Prince Natier narrowly avoids an early grave when he and his mother are attacked on a diplomatic mission to the far-off province of Septimine. Luck smiles upon him again, and the young fox survives the long journey home. Blaming his father for everything, Natier spends his days alone in his chambers, longing for freedom. His wish is granted when the young fox accidentally discovers a secret passage that leads out of the palace and into the city that surrounds it.

When the love he thought would last forever runs its course, Sirius learns the meaning of heartbreak. But in his languish, the young raccoon makes a friend in a fellow palace servant named Kaarper. The rabbit is eager to help in any way he can, and soon hatches a plan for getting Sirius back together with the love of his life. Sirius follows blindly for the sheer hope and possibility of having Alir in his arms again. As the plan slowly comes to fruition, however, the young raccoon may realize that not all the choices he will make are as clear as his love had made them seem.

Years have passed since the spy and his hunter had fallen in love. With every new assignment, Orrin and Trivus play their game, each coming within just a hairsbreadth of success to keep the higherups happy. But soon a special mission comes, and neither of the two lovers is allowed to fail. Their game has just become a war.

Prince Natier's explorations of the City take an interesting turn when he stumbles into a brothel and discovers that perhaps love and lust can, in fact, be kept entirely separate.