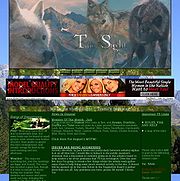 The Sight (TS) is a play-by-post roleplaying game where members create and play characters that are wolves or high content wolf-dog hybrids. It is based on the popular 2002 novel of the same name by David Clement-Davies. It has been launched twice: TS1 (2002-2004) and TS2 (2005-present).

Based on The Sight by David Clement-Davies, the game is set approximately 15 to 20 years after the end of the book. It does not closely follow, or even outright acknowledge any events that were described in the book's sequel, Fell, due mostly to the game being played long before Fell was ever published. The community itself is made up of enthusiastic roleplayers, and new members are not required to have read either of the books in order to join or play. However, those who have not read the books are encouraged to familiarize his or herself with the jargon commonly used in the game.

TS1 was first launched in late 2002 on Proboards by Tor as a community where wolf roleplayers and avid fans of The Sight could come together and write. Originally, the game was run by two other administrations in addition to Tor, known as Fenris and Wolfbane. The game began with four wolf packs: Deor, GeRad, Frecne, and the Balkar; and it included only five other in-game forums for members to play their characters: The River, The Waterfall and Lake, The Cave, The Meadow, and The Stone Castle. Most locations were based on actual places mentioned in the book. For example, The Stone Castle was the very same that Morgra (the antagonist in the book) had once visited.

The game became very popular, and its community quickly swelled in numbers. However, its reputation as a fun place to meet and play with others meant that it also attracted unwanted attention. Sometime in the two years of its existence, TS1 became the target of a hacker, who managed to delete the forums and turn the skin completely black. Efforts were made by the three administrators to revive the game and return it to normal, but their endeavors were undermined when Proboards deleted the game just as the board was returning to normal. Too many members were disregarding the terms of service of the host.

In December 2004, Tor decided to once again pursue the idea of a community for roleplayers and fans of The Sight, so in January 2005 she reopened the game, now known as TS2. The second edition featured a huge revamp of the forums. Of the original four packs, three remained, and with three new additions as the game grew more popular, there are now six packs for members to join: Deor, Ge-Rad, Koran, List, Sarnes, and the Balkar. Frecne has since become abandoned, and five new in-game forums were added for members to play in: The Vale of Shadows, The Mountains, an Abandoned Settlement, The Woods, and The Valley. The rules have become more regulated, and the Proboards Terms of Service are now strictly enforced to hopefully avoid a repeat of TS1's sudden removal. In addition to the new in-game forums, there are now also a variety of out-of-character places where members are encouraged to chat, debate, play games, and share artwork, stories, and poetry.

At its most active, the forum registered 61 users on at one time, and there is now a collection of over 800 characters, although the activity of those accounts is considerably less than 60 a day. Many board-wide plots have been launched, including some pack wars and even a plot involving the four gods.

Main article: List of packs in The Sight RPG 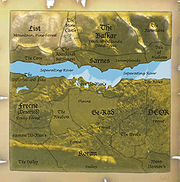 The Sight takes place in Transylvania (modern-day Romania) and is set approximately 15 to 20 years after the end events in the book. Any significant events that occurred in Fell are not outright acknowledged simply because the game has been played since before Fell was even published; however, it is likely that Larka's story is a very popular and widely known legend circulating among the characters on TS2.

The time period is roughly estimated to be sometime during the 15th to 17th century, when the Vlachs, Saxons, and Magyars were fighting over Transylvania. It is, to quote the book, "A strange and mysterious country, rich in folklore and tales of darkness and superstition. A country of soaring mountains and fertile valleys that borders the land that men know as Russia and the mighty forests that once edged the realm of Hungary."