The Secret of NIMH

From WikiFur, the furry encyclopedia.
Jump to: navigation, search
Culture > Movies > The Secret of NIMH 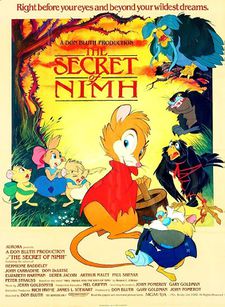 The Secret of NIMH is a 1982 animated feature directed by Don Bluth. It is based on the novel Mrs. Frisby and the Rats of NIMH, by Robert C. O'Brien.

Mrs. Brisby, a field mouse, recently widowed when her husband, Jonathan Brisby, passed away, leaving her and her four children alone. Living in a farmer's field in a concrete block, she soon finds out (from the loud Auntie Shrew) that plowing day is near, and she must move her family to a safe location before the farmer plows the field where they live; however her youngest son, Timmy, cannot go outside due to his pneumonia. The cold could kill him.

After Auntie Shrew stops the plow as it approaches the Brisby home, Mrs. Brisby departs from the field to visit the Great Owl to find out the best way to avoid the plow but spare the life of Timmy. The Great Owl tells her to move her house to the lee of the stone (her house currently is placed on the incorrect side) and to ask the rats, and to speak to Nicodemus.

Terrified, but determined to save her child's life, she approaches the rosebush near the farmer's house where the rats live. After gaining entry, she is nearly killed by a guard rat. In fear, she scampers around, and gets lost, eventually finding Mr. Ages, who lives there. As Mr. Ages tries to shoo her out for trespassing, she tells him what the Great Owl told her. Changing his tone, he begins to lead her to Nicodemus, only to be frightened by Justin. Justin introduces himself, and Mrs. Brisby is surprised that Justin knows her late husband very well. Justin, with Mr. Ages, begins to lead her to Nicodemus, however, they come upon a meeting of the council of rats, where Jenner is imploring that the rats should not move from the rosebush. His reasoning is that they have everything they need. Nicodemus' plan, however, is to leave, and begin anew, using their intelligence to forge a new place of their own, and to stop stealing electricity from the humans. The council does not come to a decision regarding this matter, however, due to the recent plea of Mrs. Brisby.

Nicodemus, the leader of the rats, is a very wise, and elderly rat. Mrs. Brisby tells Nicodemus the issue with her house, and he responds by telling her about why the rats are so eager to help her. Typically, the rats would have nothing to do with a lowly field mouse, however they have a debt to repay.

Mrs. Brisby's late husband, Jonathan, was part of a lab where the rats were held, known as NIMH (National Institute of Mental Health). Within this lab, the rats and mice were given various serums and experimental drugs. Many rats, and mice, died, but some took to the drugs, gaining sentience and cognitive capacity. Many learned how to read and write. Over time, they planned their escape. However, at the very end, they couldn't get out through the final grate to the outdoors. Jonathan was small enough and freed them. He died giving a sleeping powder to Dragon, the farmer's cat, to allow the rats to enter the house to gain access to the electricity. Nicodemus gives Mrs. Brisby a shining inscribed pendant and tells her the rats will help her.

Jenner, on the other hand, has other plans. He sets up, with one of his friends, a way to kill Nicodemus using Mrs. Brisby's house, making it look like an accident. His reasoning is that if Nicodemus is dead, the rest of the rats will turn to him for guidance, and they will not have to leave.

Jenner's plan goes off and Nicodemus is killed. Justin and Jenner have a duel and Justin realizes that what happened to Nicodemus was no accident and that it was Jenner who did it. Just as Jenner is about to win, his lackey throws a knife, killing Jenner.

Moments later, Mrs. Brisby's house begins to sink into the mud, her children and Auntie Shrew inside. The ropes holding it up continue to break, and she is helpless, watching her home disappear into the muck.

The pendant that Nicodemus gave her, however, begins to glow, and through magical means, her house is lifted in a red haze to the place on the lee of the stone, where it will avoid the plow and her family will be safe.

The movie ends with the rats leaving the farm and Timmy recovering enough from the pneumonia that he wants to come outside.