The Secret Life of Pokémon Breeders

The Secret Life of Pokémon Breeders is an anthropomorphic webcomic written and illustrated by Rose Hexwit. A new page is posted every Thursday. Though it is set in the Pokémon universe, it features original characters and a brand new conflict. 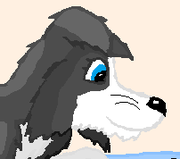 Lily is the comic's main character. She is a young Border Collie from Cherrygrove City. She is inquisitive, energetic, and sweet. Though her family struggles financially, she is given the opportunity to become a Pokémon Trainer on her sixteenth birthday. Her goal is to become a Pokémon Breeder and win Contests with her prized team.

Daisy is a Rough Collie from New Bark Town. She is competitive and virtuous and therefore leaves a very strong first impression. Her first Pokémon is a male Cyndaquil, which she receives from Professor Elm.

Scott is Lily's twenty-year-old brother. He is very generous and protective towards his sister and his Pokémon team. He obtained his Trainer Card when he turned seventeen and has been training ever since. Though he has successfully won several badges, he still has a long way before he can become the League Champion.

??? is an Irish Setter of unknown origin. He runs past Lily, almost knocking her over, on her way into New Bark Town.

Team Chihua is an organization hired by an evil mastermind to capture as many champion Pokémon as they can. Their objective is unknown...for now.

The comic opens on Lily's sixteenth birthday party. It is a modest celebration with a few presents and a colorful cake. At the end of the party, her brother hands her one final box. Inside is Lily's first Poké Ball. She had been saving her money for a long time in order to pay for her Trainer Card. The purchase of the ball means that she can go out and capture her very first Pokémon.