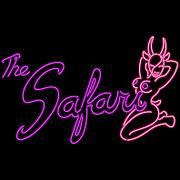 The Safari is a fictional strip club created by Kadath for the universe his characters reside in. The girls who work at the Safari as strippers are Diamond the zebra, Glitter the gazelle, Ruby the red panda, Nightshade the jackal, and Dynamite the cheetah. Vince, a rhino, works as a bouncer there.

"The Safari" is an all-female strip club that focuses on exotic species, particularly girls of African and Asian ancestry. Many of the girls there are immigrants or social outcasts, and there is something of a sisterhood between the alienated women. It is also the most popular strip club in London.

The owners of the club also have an all-male strip club on the same street, called "The Elephant's Trunk".