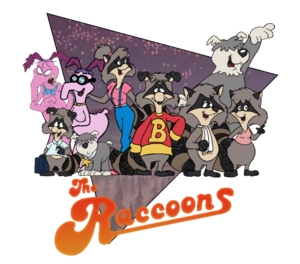 The main cast of the series (from left to right: Cyril, Bentley, Cedric, Broo, Lisa, Bert, Ralph, Schaeffer and Melissa.

The Raccoons is a Canadian animated cartoon sitcom focusing on environmental and wildlife consciousness, created by songwriter/artist Kevin Gillis. Unlike many other cartoons of its time, it handled action, humor, and romance in a fairly sophisticated manner, while remaining sufficiently uncomplicated for younger viewers.

The first animated special featuring the Raccoons was The Christmas Raccoons (1980), which was followed by The Raccoons On Ice (1981), The Raccoons and the Lost Star (1983), and The Raccoons: Let's Dance! (1984), which consisted mostly of songs and footage from the previous three specials. There is little in the way of continuity between the specials, although in Lost Star, Schaeffer comments that he recognizes the other characters in spite of the fact that they don't seem to recognize him. Music included songs performed by Leo Sayer, John Schneider, Rupert Holmes, Rita Coolidge, and Dottie West.

The Raccoons series aired on various networks, including the CBC (its original broadcaster) in Canada, and Disney Channel in the United States during its original run, between 1985 and 1992. It would later air on Trio in the USA, and on A Channel, APTN, and Teletoon Retro in Canada. There were a total of sixty episodes. The series was well-known for its New Wave-inspired soundtrack. Music included songs performed by Lisa Lougheed, Luba, and others.

On July 4, 2017, it was revealed that series creator Kevin Gillis was working on a reboot of the series. An unlisted pitch pilot with slightly redesigned characters was found on YouTube on the 11th of March, 2018, however the video was soon taken down by Big Jump Entertainment due to a copyright claim. On June 17th of that same year, Big Jump officially revealed the new designs for Bert, Ralph, Melissa, Cyril and Cedric on their website. The reboot is scheduled to premiere in the near future, beginning with a holiday special entitled "When Raccoons Fly!".